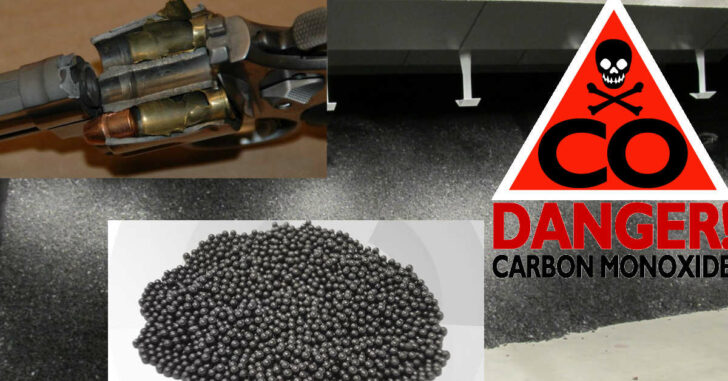 There’s hazards to any activity in life. Whether it’s crossing a street or driving to the local gas station, there’s a chance something goes very wrong, very quickly. With guns, it’s no different. The good news is there are quite a few ways to avoid the vast majority of hazards associating with carrying and using firearms.

We’ve listed a few to highlight some great preventative measures to avoid getting hurt. The most commonly cited injury related to firearms is usually due to negligent discharge. A negligent discharge is when a gun goes off when it was not intended to. This can be a cleaning accident, a snag on a piece of clothing, or someone fiddling with the trigger of a loaded gun.

In the vast majority of cases, a negligent discharge is due to operator error. It could have been prevented by the person being aware of how he or she was treating the gun. Shooting at a target backed by jagged rocks can result in a ricochet.

Shooting at immobile steel targets can result in a ricochet.

Shooting at the ground can result in a ricochet.

Ricochets absolutely can hurt people and animals. It’s important, when at the range, to shoot with a soft backing — like sand — or into a snail trap.

Lead can be slowly accumulated in the blood stream by ingestion, inhalation, and through open cuts and scrapes. The degree to which a person is exposed to lead as a result of shooting a gun correlates to their habits.

For instance, if a gun owner routinely shoots over a thousand rounds a day but takes preventative steps to keep from contamination, he would experience a far less degree of lead entering his blood stream than someone who shoots half as much but eats a sandwich right after.

Carbon Monoxide is an odorless, tasteless gas that can be created by automobiles, gas generators, and, to a certain extent, the discharge of gun cartridges.

The amount of carbon monoxide and dioxide discharged by a single pistol cartridge is very low. However, if that gas has nowhere to escape, it can be retained indoors.

A good range will have carbon monoxide monitors set up and a range safety officer should routinely check them.

There is no fool proof gun. It doesn’t exist. There is always an inherent danger when using or carrying firearms. That danger can be mitigated through preventative measures. Planning ahead, using some common sense, and following the four basic fundamental rules of firearm safety will stop the vast majority of these hazards from having an effect. A catastrophic gun malfunction is when a firearm blows apart. This is an absolute rarity. In the very rare situations this occurs, the following factors are likely at play — usually in some combination:

People who hand-load rounds have to take great pains to not get sloppy. In the rush to produce hundreds of rounds at a fraction of the cost, some inexperienced (or bad actor) hand-loaders can either overcharge a round or severely undercharge it. When you purchased a gun, you got a manual. Inside that manual, it will explicitly tell you the type of ammunition your gun uses. If that includes overpressurized rounds (+P), you’re good to use +P. If it says 9x19mm Luger, don’t load a .38 Spc. If you insist on firing hot rounds through a gun that’s explicitly not rated to handle hot rounds, don’t be surprised if it breaks. It’s still extremely rare that the break will result in the pistol blowing apart.

Just like the double feed issue, if there’s an obstruction inside the barrel, this can result in a failure for the round to fire. That energy is then transferred to the parts of the gun. If it’s a truly earth-shattering amount of energy diverted to a part not meant to handle that type of force, the results can be explosive.

In an age where everyone is trying to underbid the next guy, gun manufacturers aren’t immune. Sometimes people make junky gun parts. Sometimes a “budget conscious” gun owner will get a junky part and try to put it into a complex gun — like an AR-15 upper or lower receiver. The result can be that the individual parts are not rated the handle the wear and tear that the operator puts on them. In extreme cases, this can result in a catastrophic gun failure.

This can also happen to pistol owners as well. Jamming in an overpressurized .38 Spc round into a chamber meant to accept 9mm can result in a very bad time. Don’t do it.

The vast majority of gun-related injuries and hazards are completely avoidable. Just like motor vehicle accidents and diet-related health issues, it takes some attention to detail, a little planning, and some education to avoid these issues entirely.

Don’t let hazards get in the way of your gun owning experience. Carry concealed — using the right holster, the right round, and the right parts.

Previous article: Woman Grabs Gun When Faced With Home Invader, Asks Him To Leave Next article: 10 Ways To Get Kicked Off The Range -- If You're Lucky