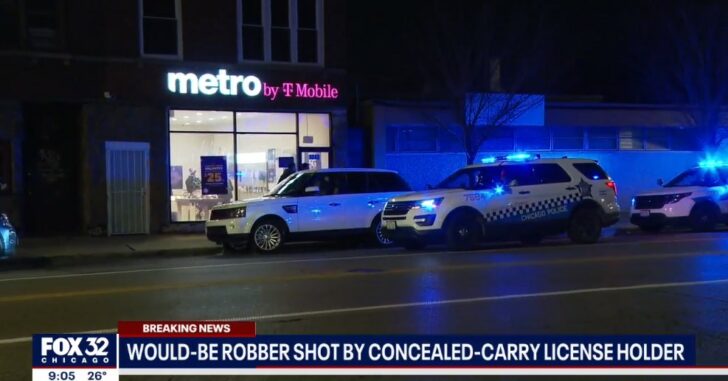 CHICAGO, ILLINOIS – The day after Christmas was the last day on earth for a man who attempted an armed robbery of a cell phone store around 7 in the evening. The incident occurred at a Metro by T Mobile store in the 3400 block of West Chicago Avenue in Humboldt Park.

The suspect entered the store and during the robbery attempt, was shot in the chest and abdomen by another man in the store. Identified only as a 29-year-old, it is not clear whether the man was an owner, employee or customer, but police confirmed that he did have a valid concealed carry permit.

The robber was transported to Stroger Hospital in critical condition and was pronounced dead on arrival, and police have not released his identity. The guns of the robber and the concealed carrier were confiscated by police.

One thing that many concealed carriers fail to consider is the fact that if they use their gun, there is a very high probability that it will be confiscated by authorities as part of the investigation. It may be returned, but it could be months or even years before that happens, even if the gun were legally owned, carried and fired in self-defense.

If you are a concealed carrier, think about the handgun that you are carrying.  Is it a high-value gun, either monetarily or sentimentally? Reliable self-defense handguns suitable for concealed carry can be purchased for around $500, but many owners spend $1,000 – 1,500 or more for a high-quality firearm. Others carry guns that were handed down by a family member, purchased from a dear friend, or that have strong emotional attachments for other reasons.  Before you carry, ask yourself if you would be willing to relinquish possession of your prized possession for months, years or possibly even lose it forever.