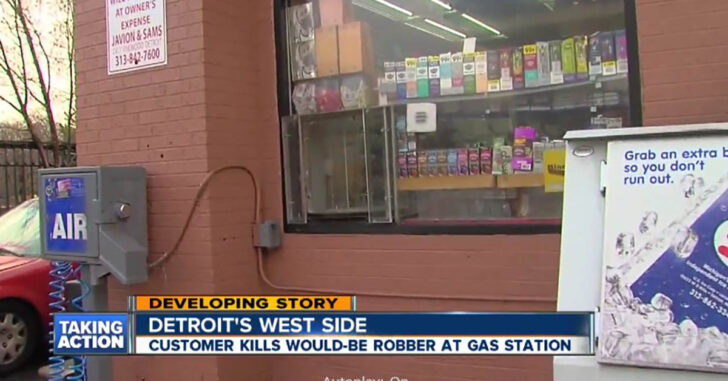 DETROIT, MICHIGAN — A would-be armed robber was shot and killed when he walked behind a gun owner purchasing cigarettes at a local gas station.

According to WXYZ-7, the robber walked up behind him and told him to empty everything out of his pockets.  That was when the gun owner turned around and shot the robber at close range.  The would-be robber was pronounced dead at the scene.  No further injuries to report.

“It’s poetic justice,” said one witness to the crime.  “You come to do something that tainted, you know, that [malicious], and it just that raunchy to another person and he flips the script on you!”

Detroit police are not expecting to press charges against the gun-owner.

“He was stunned just like any of us would be,” the store manager said about the victim.  “We’ve been here thirty or forty years and we’ve never had anything like this happen.”

Detroit is famous for being a high-crime environment where thugs don’t think twice before using force against victims.  One of the rude awakenings for these criminals is when one of their own goes home in a bag.  This type of idiocy just won’t stand and it’s good to know that the folks of Detroit are able and ready to handle it.