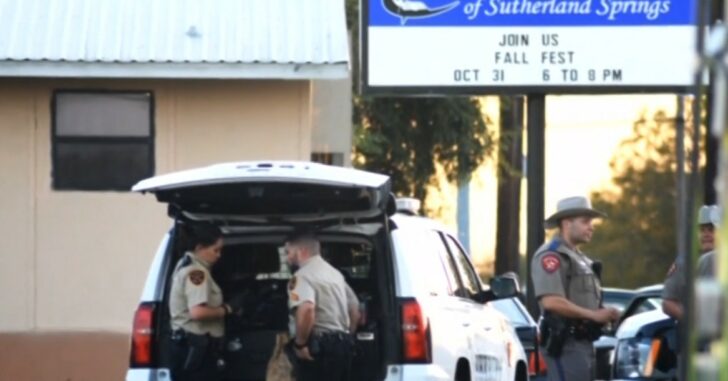 SUTHERLAND SPRINGS, TEXAS — A man with a yet unknown motive walked into a Texas church and opened fire on the people inside, killing 26 and injuring at least 20. It is the deadliest mass shooting in the state’s history.

The lone gunman, dressed in black tactical gear and a ballistic vest, drove up to the white-steepled First Baptist Church in Sutherland Springs and started firing inside. He kept shooting once he entered, killing or wounding victims ranging in age from five to 72 years, police told a news conference.

A local resident, who heard the shooting, grabbed his rifle and made the decision to confront the gunman. That resident fired at the suspect as he was walking out of the church. As a result, the suspect dropped his rifle and got into his vehicle to make a getaway.

He didn’t get very far.

A man told San Antonio television station KSAT he was driving near the church when the resident who had opened fire on the gunman approached his truck and urged him to give chase.

“He said that we had to get him (the gunman), and so that’s what I did,” Johnnie Langendorff, the driver of the truck, told KSAT. He added they reached speeds of 95 miles (153 km/h) per hour during the chase, while he was on the phone with emergency dispatchers.

Shortly after, the suspect crashed his car and was found dead inside by police. It isn’t yet known whether the suspect took his own life or was hit by the armed citizen during the chase. Numerous firearms were found inside his vehicle, which would hint at him having plans to cause more casualties at different locations.

President Trump, while in Japan during his 12-day Asian trip, made the following comments about the incident;

“This isn’t a guns situation, I mean we could go into it, but it’s a little bit soon to go into it,” Trump said. “But fortunately somebody else had a gun that was shooting in the opposite direction, otherwise … it would have been much worse. But this is a mental health problem at the highest level.”

The suspect was not yet identified, but described as a white male in his 20’s. Some media outlets are reporting that he served in the Air Force, and was kicked out for assaulting his wife and child.

The names of all victims haven’t been released, but they say they range from 5-72 years in age.

If it weren’t for the armed citizen who engaged the suspect, many believe that the devastation would have been much worse. It’s a sad day for America, and our thoughts are with those affected by this senseless tragedy.

As with any of these horrific events, we as people to take a look at their own personal lives and ask yourself; Are you prepared for something like this, if it were ever to come your way?