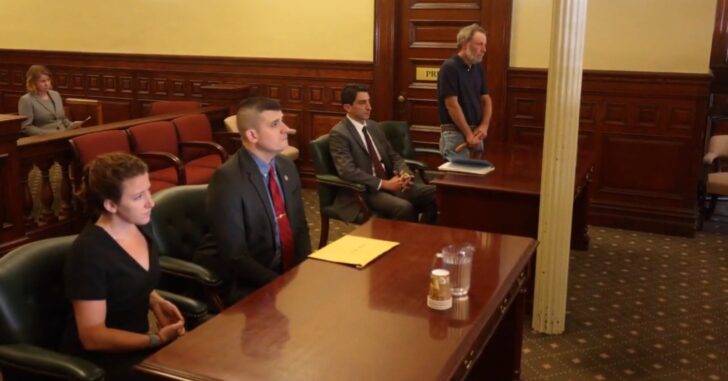 I have to go back a little way to share the relation. Step into the time machine and join us for years 2004 through 2009. I was in a relationship with someone for 5 years, starting in my mid-20s.

She had a step father, Bob, who was an avid outdoorsman and gun owner.

Fast forward to a few days ago when I stumbled upon a news article that detailed an arrest under New York State’s brand new and shiny Red Flag Law.

This law, in a nutshell, takes all guns away from a person, without due process, if that person is deemed to be a threat to either themselves or others.

In this case, here are the details from local media;

“State Police filed the Extreme Risk Protection Order because during the course of the investigation, it was determined that Robert King could pose a threat to himself or others,” Trooper Aaron Hicks said in a statement.

This comes after King was arrested on Tuesday, charged with reckless endangerment and felony possession of a firearm. Troopers say he fired an unregistered gun near Route 22 in New Lebanon and the bullet hit a nearby parked pickup truck.

After King was arraigned at New Lebanon Town Justice Court, his spouse says he made a comment in the parking lot about how it would be easier to kill himself than deal with New York State laws. She says the comment was taken out of context, and he wasn’t remotely serious about it.

Checking up on the progress, Bob did return to court. His guns will be taken away for 1 year, pending any further objections.

Breaking: The first Red Flag Law case in New York plays out in Rensselaer County. A judge ordered a pistol and seven long guns be taken away from 52-year-old Robert King of Stephentown. Prosecutors say King was suicidal. He’ll get the guns back in 1 year pending objections. @WTEN pic.twitter.com/HU2w1TTjmg

While Bob may have certain things going on in his life, I never saw him as a person who would harm himself or others. If anything, his comments came out of frustration for the gun laws in New York. That’s my bet.

The first Red Flag Law bust…. Seems to be a bust.

Previous article: Man In Casino Brutally Attacked And Robbed, But He Has A Gun And Wins The Jackpot Next article: Home Invasion Leads To Homeowner And Intruder Shot After Gun Fight