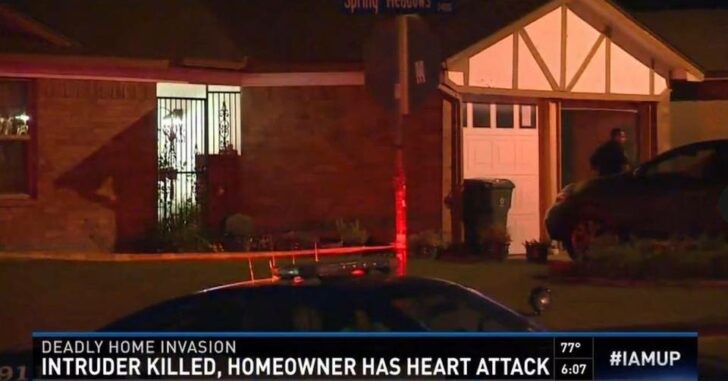 ARLINGTON, TEXAS — A man died of a heart attack after fatally shooting an armed robber.  The armed intruder, Destrey Tinner, previously lived down the street from David Stephenson, according what investigators told Star-Telegram.  Police say Tinner approached Stephenson in his garage and an argument took place.

“Detectives are still trying to determine what occurred at the home. Early information indicates that Mr. Stephenson and his wife were in the garage, when Mr. Tinner approached them. As such, Mr. Stephenson’s wife witnessed at least part of the altercation that occurred,” Rodriguez wrote.

So it looks like Tinner approached the couple while they were in the garage.  Unfortunately, after Tinner was shot, David Stephenson began to go into medical distress.  He was rushed to Medical Center of Arlington.  Both Stephenson and Tinner were pronounced dead 20 minutes apart from one another.

Star-Telegram reports that there were two firearms recovered at the scene – indicating that both the intruder and homeowner were armed.

Tinner had previously taken a plea agreement to avoid charges in choking a 33 year old woman.  Court records for Tarrant county showed he was out on probation at the time of this incident.

Unlike the events in D.C., at least this Texas homeowner was able to defend his family with lethal force.  It’s just sad his ticker decided to quit shortly thereafter, as a result of this thug and his decision to invade the home.

How do you calm yourself down after a high pressure situation?  Tell us in the comments below!