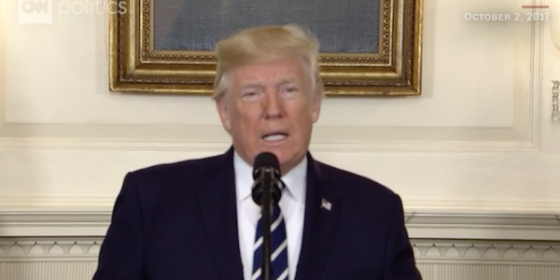 By Robert Fargo via The Truth About Guns

“President Donald Trump said Tuesday that the US will ‘be talking about gun laws as time goes by’ in the wake of the Las Vegas shooting, the nation’s deadliest in modern history,” CNN reports. He had even less to say about the prospects of the SHARE Act, which would deregulate silencers . . .

The President was asked about a gun bill currently making its way through the House that would loosen restrictions on purchasing gun silencers. Trump said that he would talk about that later.

thehill.com reports that one of the President’s former advisors had a stern warning for his former boss, should the NRA-supported Commander-in-Chief decide to “pivot” towards federal gun control . . .

Former White House chief strategist Stephen Bannon reportedly said it would be “impossible” for President Trump to move to the left on gun control following the deadly mass shooting in Las Vegas, adding that it would be the “end of everything.”

The president’s former top aide also told the news outlet that it would be “actually worse” for Trump among his base of supporters if he backed guncontrol legislation than if he backed an amnesty bill for undocumented immigrants.

Well, presidential support for a new federal gun control measure would certainly be the end of a great deal of the former reality TV star’s core support.