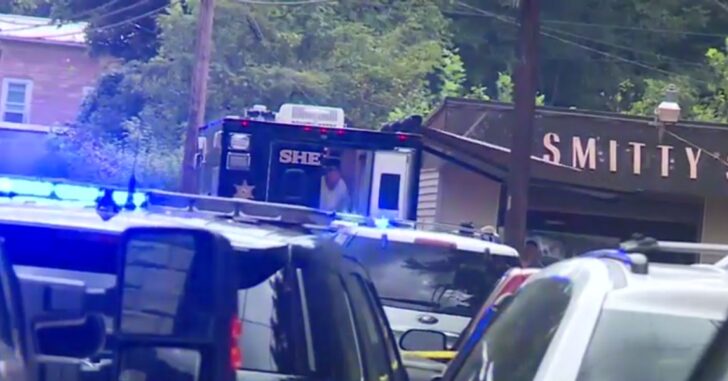 SISSONVILLE, WV — A man is dead after a bizarre chase with a knife turned into a prime example on why you don’t ever bring a knife to a gunfight.

The Charleston Gazette-Mail reports that a man shot and killed Tracy Stalnaker, 53, after being pursued with a knife.

“He was never right, but today he was really messed up in the head,” Debbie Carpenter, owner of the Raw Bar II, said.

About 15 minutes before his death, Stalnaker came into her bar and started an altercation.

He was carrying a can of beer not bought in the bar.

Carpenter told him to get rid of the beer, so he left. When he came back, she noticed that he was carrying a knife in his waistband.

Then she noticed that he was not carrying one knife, but several.

At one point, Stalnaker threatened her with a knife in each hand.

Although she could well have shot him and remained within legal bounds, she didn’t. That came shortly thereafter.

Stalnaker pursued another man, still armed with a knife, to the front of Smitty’s Auto Parts, when the man he was chasing turned, produced a firearm, and shot Stalnaker.

Stalnaker did not survive.

As for the man he was pursuing, it does not appear that he will be charged.

“No one is in custody,” said Kanawha County Sheriff’s Office’s Sgt. Brian Humphreys. “There is no ongoing danger.”

It is well that he was not charged — his life was clearly in danger, and it seems equally clear that the armed citizen couldn’t do a thing to break off from the engagement if had chose to evade rather than engage.

A relative of Stalnaker reported that he had a mental illness.