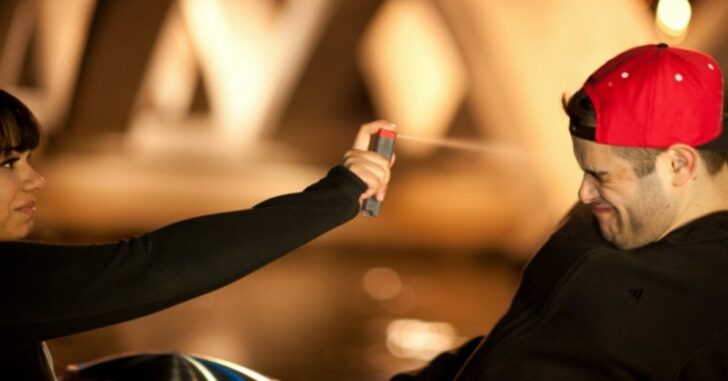 For most of us who go armed the central weapon in our daily routine is a concealed handgun. The handgun is, bar none, the most effective form of personal defense an individual can carry concealed on the body. However, there are good reasons to seek defensive alternatives to the handgun, and this can encompass other lethal force options, such as edged weapons, or less lethal options such as chemical spray, focused impact, or conducted electric weapons. Notice I refer to “less lethal” rather than “non-lethal” as any of these devices have the potential to inflict lethal results if an individual has a particular vulnerability or condition, or if a situation simply escalates beyond what is anticipated. The two primary reasons for the carry of less lethal defense is for those circumstances when you cannot be fully armed with a firearm for legal reasons, or as a daily supplement to your firearm for hostile, yet perhaps not deadly, aggressors. I aim to primarily address the later concern here.

Utilizing a firearm is appropriate when facing a violent threat that poses eminent danger of death or grievous bodily harm. The principles of when one is justified to use lethal force is an extensive subject and if you carry a firearm you must educate yourself on the laws, both universal throughout the United States and those particular to the jurisdiction where you live or travel. However, there are also plenty of possible individuals that one may deal with that act hostile or aggressive, yet do not constitute a deadly threat. It is for such situations that carrying a less lethal defense option makes sense. Beyond just our legal obligations, most would agree that using lethal force is the absolute last option we would ever want to take, and would only do so if there is indeed no other choice. For these reasons, carrying a less lethal solution can prove valuable for when you need to deal with hostile, yet not deadly, behavior.

Before considering the less lethal options available we need to broach a subject that is critically important: disparity of force. The reason I mention disparity of force is because it has a great deal to do with when an individual would be legally justified in using lethal versus less lethal defensive measures. I encourage you to familiarize yourself with disparity of force if you have not done so. Obviously, and attacker that is armed with a deadly weapon constitutes a deadly threat and typically warrants a lethal force response. But when dealing with an unarmed aggressor disparity of force refers to the difference in physical ability between two combatants, and when one combatant is much larger, stronger, perhaps trained to a higher level, or perhaps simply in a position of advantage, there is disparity of force. Being outnumbered by attackers is also disparity of force. The most obvious example is male-on-female violence. The average male is much stronger than the average female. Also, an elderly person or a physically disabled person is not expected to trade blows with a younger male, even if the aggressor is unarmed. In such situations a resort to lethal force is often justified in the circumstance of a violent attach that poses potentially dangerous bodily harm or death to the victim.

However, what if two men of similar physical size and strength get into a fist fight over a parking space? If one uses lethal force on the other, do you predict a legal problem for the victor, even if it is clear based on witness testimony that the guy who got shot started it? You bet. What if the defender deployed lethal force if he was attacked by several men of equal physical size and strength and they all began beating him? Now there is disparity of force, and a lethal response would be much more justified. Even against a single aggressor of equal size and strength, what if the defender gets sucker punched and knocked to the ground and the attacker jumps on top of him and begins slamming his head against the pavement? This position of advantage by the aggressor actually constitutes disparity of force and a lethal response, such as gun fire, is much more justifiable. However, in the example of man-on-man between two relatively equal individuals in which both are on relatively equal footing, a lethal force response will be hard to justify, and would be a sad way to end things in general. Under such circumstances a less lethal option is a good thing even when carrying a gun.

You must also know the difference between situations that warrant less lethal versus no force at all. If you spray someone in the face with OC spray or whack an individual in the collar bone with a tactical pen just for saying something mean to you then prepare to get arrested for assault. Generally, if you are justified to use open hands to defend yourself, you are justified to use a less lethal option. You are not justified in using a less lethal weapon simply to resolve a heated verbal argument. An aggressor would have to lay hands on your or show a clear intention of doing so before you could legally employ a less lethal option.

Keep in mind that there are different needs for less lethal. For example, a strong male highly trained in unarmed combat may carry pepper spray because he would rather spray a drunken trouble maker than have to go hands on and really hurt the said drunk. A small female may need to spray the drunken trouble maker because she does not want him to put his hands on her in an uninvited manner. Either point of view is correct. Even if capable with your hands you always risk injury to yourself if you go hands on, which is not fair to you due to another individual’s aggressive actions. This is a valid reason to carry a less lethal weapon.

Another question on this subject is “will carrying a less lethal option get me in trouble if I go to court after a deadly encounter.” This is understandable, because it is conceivable to imagine a prosecutor attempting to say “why did you shoot when you could have just used pepper spray!” The opposing argument, though, is that only carrying a lethal option can make you appear to be “just looking for an opportunity to shoot someone.” Most lethal force experts now suggest carrying less lethal alternatives even when armed with a handgun. My opinion is that I would rather have a less lethal option available if it gives me the opportunity to resolve a heated situation without resorting to lethal force. This issue illustrates why a good understanding of the law is paramount. If you need to defend your actions after a deadly encounter you need to be able to articulate the reason you used the level of force that you did.

In part two of this article we will discuss the less lethal options we have available to us.