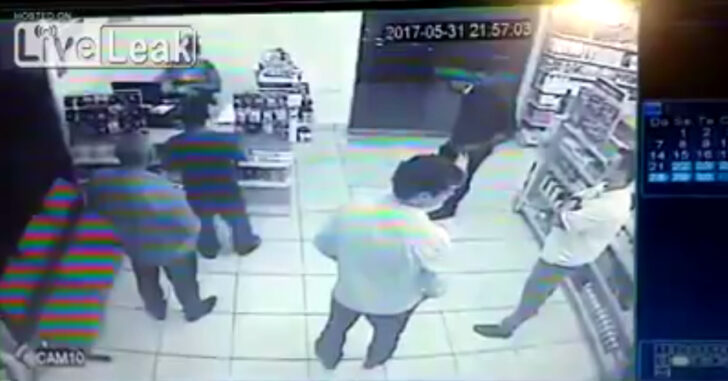 BRAZIL — In the United States, it’s common for citizens to be armed while out and about. In the country of Brazil, however, citizens aren’t legally allowed to carry firearms with them. It’s also extremely difficult to even have a gun at your home.

In this particular case, the robber in the below videos had the worst luck possible in Brazil.

At the store he chose to rob, every single person inside at the time… was armed.

Sources tell us that the armed individuals inside were police officers — the only people allowed to carry firearms in the country. Very unlucky for this criminal.

Watch the video to see how it all played out.

In the second video below, we’re given a different angle of what went down. It is not completely known who fired the first shot, but it seems that it could have come from the man who first moved towards the back of the store for a little cover. See for yourself:

What an unlucky criminal. The outcome of this encounter isn’t known, and we searched high and low to find more information. Whether the bad guy survived is anyone’s guess, but it’s safe to say that he likely won’t be creating problems anymore. See that? That’s not 1, not 2, but 3 armed people ready to defend, all in a single video screenshot. Others in the store were armed as well, and it was an overall bad day for this guy who simply ran out of luck.

Previous article: #DIGTHERIG - Debora and her Smith and Wesson M&P Shield 40 in an Alien Gear Holster Next article: Man Slaps Away Neighbor's Gun During Arguement, Goes To Hospital And Jail