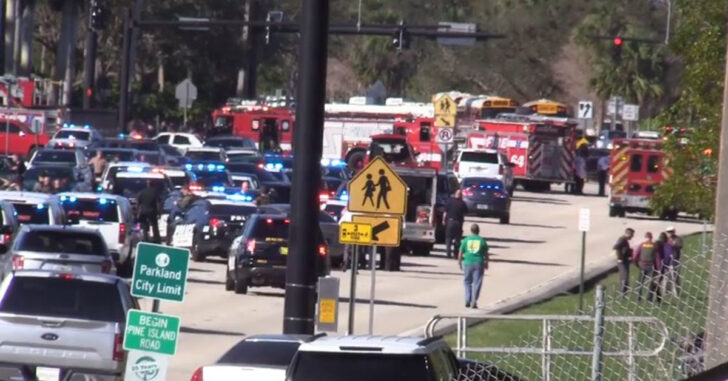 PARKLAND, FLORIDA — With something that can only be described as heinous, a teen opened fire on students at a high school in southern Florida Wednesday afternoon, leaving a trail of destruction behind him during an hour of chaos.

The incident began shortly after 2pm EST Wednesday when a previously expelled student from the school began shooting in the hallways. Reports state that he was expelled for disciplinary reasons, but no other information was available.

That student, who we will not name, was taken into police custody shortly after the shooting.

Students were hiding under desks and classrooms were locked down tight during the incident, but a large loss of life was still seen. The school, says officials, had everything in place for such an incident, and did everything by the book.

Today, we learned that the gunman used an AR-15 that was legally purchased by himself.

The AR-15 used in the mass shooting was legally bought by Cruz, attorney Jim Lewis told the South Florida Sun Sentinel. Cruz already owned the gun when he moved in with his friend’s family in northwest Broward around Thanksgiving, Lewis said. “It was his gun,” Lewis said. “The family made him keep it in a locked gun cabinet in the house but he had a key.”

Officials started looking for answers as to why this teen would carry out such an attack, and found what was described as “very, very disturbing” content on his social media accounts.

The investigation is obviously still ongoing, and a community and nation have come together to support those who have been injured and killed.

We will share more information as it becomes available.