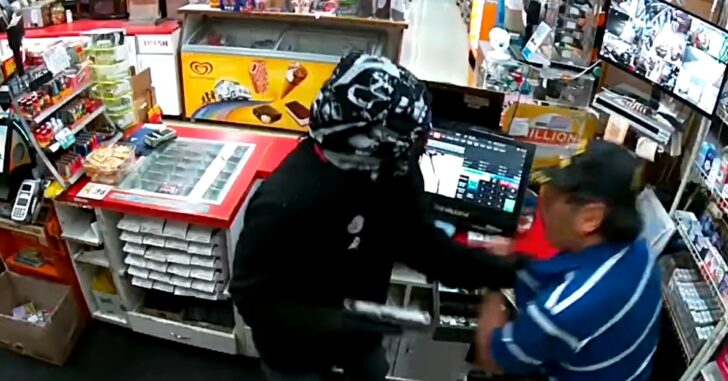 SAN FRANCISCO, CALIFORNIA — A clerk was able to get to his firearm just in time, but the odds were definitely against him during this armed robbery.

Deputies have identified the suspect as 31-year-old Michael Andrew of Merced.

In surveillance video, you can see Andrew hit and knock down the clerk, Mark Kasbrowicz, and then go for the cash in the drawer.

Kasbrowicz went down, but he didn’t go down for good; he crept back up, got pushed but didn’t give up and then grabbed the store’s gun.

During the surveillance video, I found myself on edge knowing that the clerk’s gun was in the drawer right next to the cash register. The armed robber is oh-so-close to that drawer, and he could have easily opened it to see the gun sitting inside.

After some attempts, the clerk gets the gun, and is immediately pistol-whipped again by the robber.

During this, the robber’s gun goes off, although it seems that no one was struck with the bullet. It was enough to send the robber running, because he probably didn’t even realize that it was his gun that went off.

During his attempted retreat, the clerk sees the opportunity to shoot.

He fires a single shot.

The robber is hit, and will later die outside in the parking lot.

Nothing about this incident is textbook, and so many things could have gone wrong during this incident. Take the armed robber’s pistol-whipping as an example. The way that he does it the second time around –the time that his gun discharges– he has it pointed directly at the clerk in some moments.

The image below is RIGHT before the gun discharges, missing the clerk by inches.

As soon as the robber starts running, the clerk is quick to get a shot off. And that shot was on target.

As the robber runs past the clerk and out the door, the two have moving standoff which results in no additional shots being fired.

This is one of the crazier videos we’ve seen when it comes to self-defense, and we’re so happy to know that the clerk wasn’t shot during this incident.

Previous article: Female Security Guard Stops Three Armed Robbers, Shoots One In The Rear End As They Fled Next article: Wife Pulls Out Gun And Shoots After Husband Is Confronted By Multiple Armed Attackers