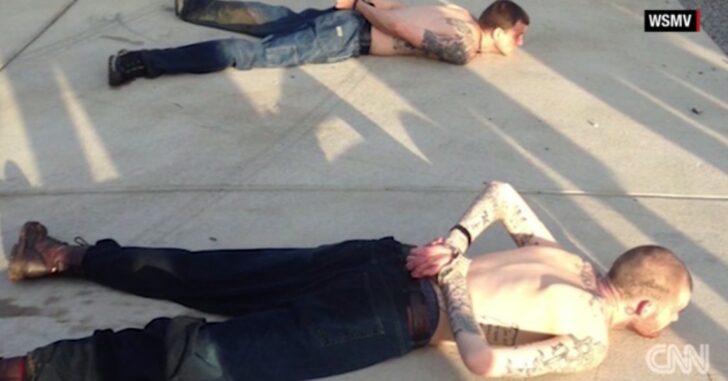 Donnie Rowe and Ricky Dubose were being transported between prisons on a bus with 33 inmates, and they managed to overpower the guards. Two prison guards were shot to death.

The minutes that preceded their escape are still under investigation but police say the two somehow got out of what should have been a locked, gated rear section of the bus.

They entered the driver’s compartment, overpowered and then disarmed Officers Christopher Monica and Curtis Billue while the bus was on State Route 16 near Eatonton, some 70 miles southeast of Atlanta, police said.

These events sparked a multi-state manhunt for the two criminals, who were causing chaos along their route to try and escape. The photo above shows the scene where the prisoners escaped.

The men stole numerous vehicles and broke into a home. Inside the home, they tied up a couple and ate their food and stole items. Then, they were back on the road.

Police caught up to them and a car chase ensued. The vehicle that they were driving crashed, and the two men fled into the woods.

Their next decision would prove to be their downfall.

An alert homeowner saw the two men on his property, and noticed the pair trying to steal his vehicle. That’s when the homeowner called his neighbor, and they both armed themselves and confronted the suspects. Having lost their guns in the crash, the suspects were unarmed and had no choice but to surrender to the two armed citizens. Police arrived shortly after to arrest the murderous thugs.

“I can’t say enough about the bravery of the homeowner, and what they took on, the wherewithal to call us and give us the information so we could get over there and apprehend these two subjects,” Rutherford County Sheriff Mike Fitzhugh said.