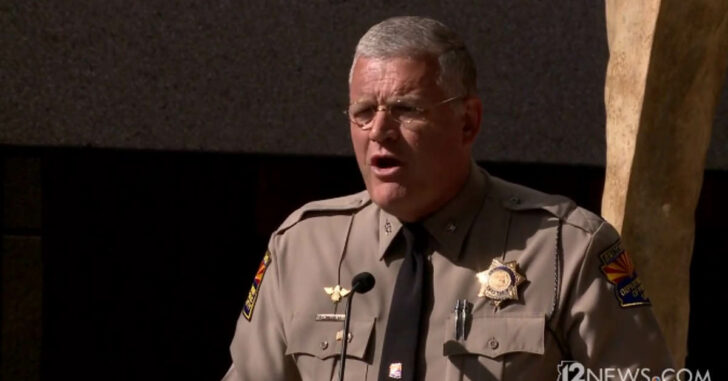 About a month ago, we covered the harrowing tale of a Good Samaritan coming upon a downed Arizona DPS trooper on the highway. The trooper, Ed Andersson, initially responded to a call about a man shooting at passing motorists. When he arrived at the scene, he was brutally attacked by 37-year-old Leonard Penuelas-Escobar. Penuelas-Escobar beat the officer down and was in the process of beating his head into the pavement when Thomas Yoxall arrived.

We now know, thanks to details of the investigation sourced in part by Independent Journal Review, that Penuelas-Escobar was likely in the country illegally and was formerly a Mexican police officer.

The Good Samaritan was on a 5-hour drive to California for a conference when he discovered Andersson being beaten by Penuelas-Escobar. He got out and asked Penuelas-Escobar to stop. When the suspect refused, he shot him twice. The assailant died at the scene and Andersson was taken in for urgent treatment of his injuries.

A good day for the Good Samaritan, right? Well, apparently, it could have easily never happened.

Yoxall was a prior convicted felon in a theft case that happened in 2000. He pleaded down the felony to a misdemeanor and asked a judge to restore his gun rights because he was an avid hunter. The judge thankfully restored his gun rights, thus allowing him to carry the gun he used to shoot and kill Penuelas-Escobar and save Andersson’s life.

This is one of those stunning occasions where our normal prejudices about who deserves to carry a gun would be dead wrong. While convicted felons are normally prohibited from possessing firearms, this man proved that he could rise above his criminal past and save another man’s life.

That’s something worthy of attention and pause in a world where we’re seeing more and more acts of senseless, random violence take place.

Is a man more than just his past? Can he demonstrate reform to such a degree that society deems to give him back his most basic, natural rights?

It’s a conversation that’s being had in courtrooms and legislative offices around the country. Whether it’s the case in Tennessee of a convicted felon using a gun to protect the life of a store clerk or this instance in Arizona, there are cases where men rise to the occasion and stop violent, evil acts from taking place.

I’ll be the first to admit that I’m highly speculative on restoring gun rights to felons. I think it’s something that needs to be considered on a case-by-case basis and takes into account steps an individual has taken to prove he has reformed.

That said, I think if society does not offer a clear road to prove that reform, we’re losing out on a significant number of people that can and will do something to protect another person’s life.

Every single one of us needs a Good Samaritan if we ever get taken down by a violent criminal. If it’s an ex-felon with a gun who happens to save your life, will it matter to you?