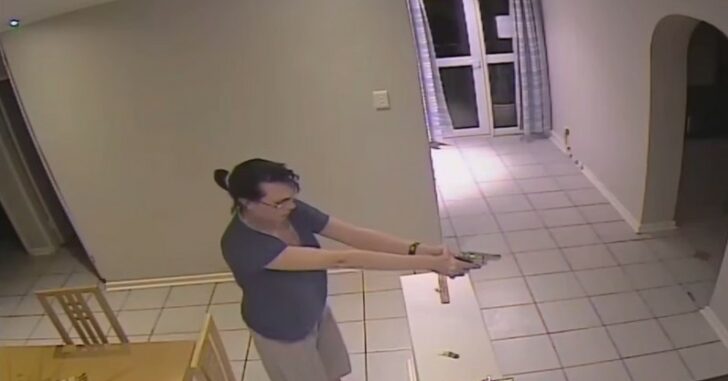 PARI PARK, SOUTH AFRICA — A homeowner gives us a play-by-play with the above surveillance video from their home in South Africa that shows a home invasion by multiple unidentified men.

During the video, we see numerous men creeping around the home that have entered during the night. A couple was home at the time, and the woman wakes up when she hears something.

She fires several shots that send the bad guys out the window in a hurry. They were able to get away with some valuables, and it is not known if any of them were hit by the shots.

A curious moment in the video is when the male occupant is seen jumping out of bed at the sound of the first gunshot. As he immediately gets up, he already has a revolver planted firmly in his hand, as you can see in the screenshot below. This frame is a split second after he hears the first gunshot. One would be tempted to cry ‘staged’, but after reading various comments on the video, it seems that this is relatively common practice in the area because crimes of this nature happen frequently. I, for one, would never sleep with a loaded gun in my hand. That’s just asking for trouble IMO. Sure it’s a revolver, and it sounds from the comments like he keeps the first chamber empty, but I still wouldn’t do it.

But the female occupant, bravo! Great job being alert in order to successfully defend yourselves and your home.

As if it’s not creepy enough to have uninvited people in your home late at night, the worst part for me to watch was when the intruders were in the same frame as the man sleeping. He had absolutely no idea they were so close and had they decided to keep moving forward, they would have been standing right over him. Previous article: A Woman Was At Home Waiting For Her Husband When An Intruder Broke In. He Didn't Make It Far. Next article: Illegal Concealed Carrier Stops Mass Shooting: What Should Happen?