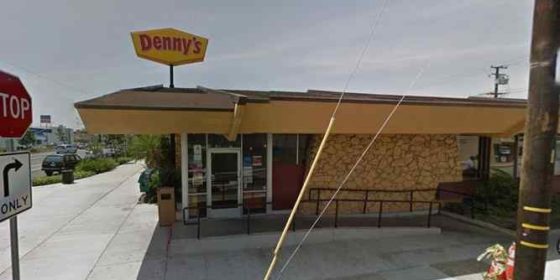 LOS ANGELES, CALIFORNIA — At least three robbers, one of whom was armed, attempted to hold up a victim outside a Denny’s restaurant on 132nd and Hawthorne Boulevard. The victim escaped into his car. During the escape, the armed robber got in between the victim and his escape so the victim ran him down.

According to Mercury News, the armed robber shot himself in the mouth when he was struck by the car. Police admitted the robber into the hospital where they say it appears the gunshot was accidental in nature.

“Right now it sounds like it was an accidental, self-inflicted (shooting) when he got hit by the car,” Lt. Steve Romero said. “The suspect shot himself accidentally.”

The round is believed to have gone through the robber’s mouth and come out the front of his face. He missed the training class where they taught that you take your finger off the trigger until you’re ready to fire.

It’s another example of victims refusing to be victims and bad guys with guns not knowing how to properly use them. No surprises there. And it’s no surprise his buddies left him behind. After all, when a violent felony takes place and one of the criminals dies or gets injured, his accomplices are charged with that damage.

Looks like more than one criminal skipped out on the check at that Denny’s.

For those targets by armed robbers, it’s hard to know what comes of an attempt to escape or fight back. It’s a constant worry in a lot of people’s minds as to whether they’ll just roll over and play dead or attempt to flee.

Here’s the thing: when you have three bad guys and their own vehicle, there’s the opportunity to be taken hostage in addition to simply robbed or assaulted. And let’s not eliminate the option of getting shot. If this armed robber wasn’t smart enough to keep his finger off the trigger, there’s a real chance that we encounter a Pulp Fiction backseat scenario.

Fight, flee, or play dead. Those are the three options when staring down the face of a group of armed criminals. This victim chose to do the first two and leave the third option for his attacker.