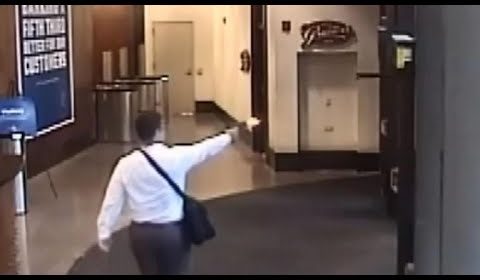 CINCINNATI, OHIO — As unarmed security tried to help get people out of harm’s way, a man in a button-down shirt walked through the bank and fired his handgun at people as they tried to flee. It wasn’t until police arrived that the man was taken down, so that he couldn’t hurt anyone else. He seemingly had a plan, as well as 250 rounds of ammunition. The responding officers faced fear with true heroism, and not stopping until the gunman was eliminated. The shooting happened Thursday morning and left three people dead and two others injured. Police have not determined a motive for the shooting. The video (above and below) shows the police response, as well as a bit of surveillance video just before their arrival. It’s amazing how brave the responding officers were, and they did not hesitate to act as quickly and as safely as they could. This was a situation where many of the officers were completely exposed behind large glass windows, and any one of them could have easily been struck by the gunman’s bullets. The gunman, who we will not name, was shot and killed. One woman was shot 12 times, but did not die. Another man was also shot and survived. Three, however, did not make it.

Richard Newcomer, 64, was supervising a construction project on the building’s third floor. Prudhvi Raj Kandepi, 25, was a programmer and consultant for Fifth Third. Luis Calderon, 48, moved to Cincinnati last year to work for the bank.

I worked in the banking industry for nearly 10 years, but it was before I carried a firearm. Of course, most banks (if not all) have policies that prohibit employees from carrying a firearm at work. These policies, however, are in place primarily due to the banks not wanting employees risking their lives to stop a bank robber. But now, a new threat of random mass shootings looms across America. I can say for certain that if I still worked at a bank, I’d be carrying without my employer knowing. It’s not illegal in many states to carry your firearm inside a bank.
Categories: General, News