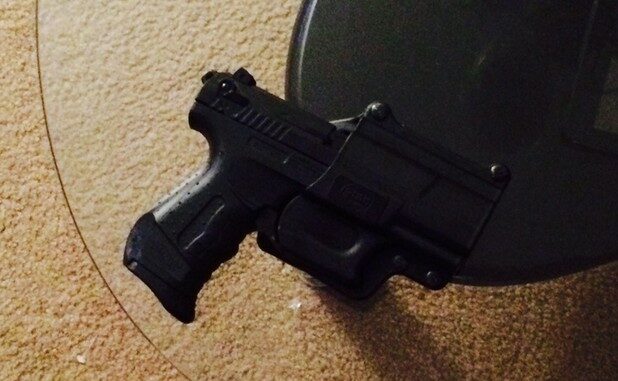 Right out of the gate, I’m going to tell it like it is.

Let’s file this under “Worst Ideas Of 2015”, as it’s likely to take 1st place even with nearly 12 months left to go in the year. This story is so crazy to me, it’s the first to make me create a brand new category on the website to file it under: Darwin Award.

A viewer sent me a link to a website and at first glance, I figured it to be a hoax. It had to be. And to be honest, I’m still not 100% convinced that it’s real.

The company, founded last year, is called PCD which stands for Perceived Carry Decoys. If you’d like to say hi, here is a link to their Facebook page.

In a nutshell, this company is set to launch a product line of fake pistols. The reason? So that people can be perceived to be armed… and I quote… “without the hassle of owning an actual firearm.”

That’s just the tip of the iceberg, folks. From their website:

WHO ARE PCD DEVICES FOR?

As you can see, the uses and possibilities are endless.

The fake pistol and holster are all one piece, and the user is to simply wear it around to pretend that they are armed. Does anyone out there see anything (or a thousand things) wrong with this?

According to the company’s website, it was founded “by a U.S. Marine Corps veteran who served multiple combat tours to Iraq, and other places throughout the world.” A person with such a background should know that bringing a fake gun to a gunfight is not a good idea. What happens when a person is using this product while shopping in a store when an armed robber comes in. When that robber sees this ‘gun’, guess who is getting shot first?

Ethics out the door, the company website is kind enough to offer a Legal page. However, it’s likely not going to help them after the first person gets shot and killed for using their product. Here’s the wording of their Legal page as of this writing:

Open carry is not legal in all states, and although these are not actual firearms, it is recommended to check with state and local laws before purchase. Even states which permit open carry may have restrictions on where it is allowed e.g. bars, banks, etc.

As always, if faced with a life threatening situation, seek safety first, then call 911.

PCD assumes no responsibility for the use of these devices after purchase.

In my opinion, this is not a way to make money, and it is dangerous and wrong on many different levels. These products serve no functional use in the way that they are being promoted. Maybe they should call up Hollywood to see if they need some prop guns. These products can have some practical use, such as for video productions or photography projects, but this is not it. You are putting the safety of people in jeopardy.

Comments are already starting to pour in on their Facebook page, and it’s not surprising in the least. And, the comments are on-par with everything that makes up this article: In the image above, John brings up a very good point. If the company is using specs of current pistols, they will most likely need permission to do so.

And if you are even considering a purchase from this company, well, best of luck to you.