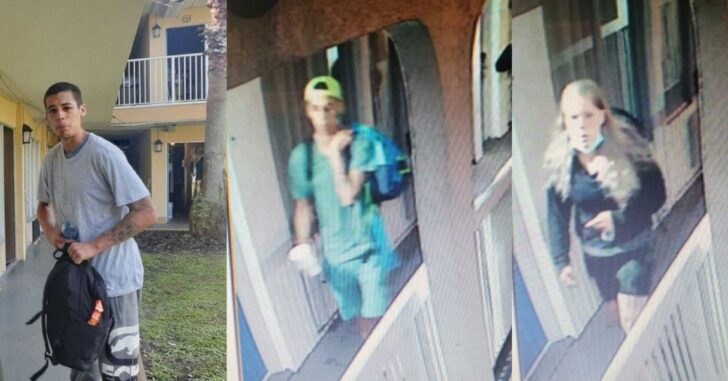 DAYTONA BEACH, FLORIDA – A man, accompanied by a woman, attempting to break into a hotel room Saturday was shot in the rear end by the occupant of the room.  The Volusia County Sheriff’s Office says the incident occurred around 3:00 a.m. at the Motel 6 on West International Speedway Boulevard.

VCSO public information office Andrew Grant said a man and a woman were trying to enter the occupied room through a window. The occupant woke up and fired a gun at them.  The man was rewarded with a lead injection in the buttocks, according to deputies.

The pair fled the scene and were believed to be headed toward the Tomoka Farms Road area. Images of the pair were captured on surveillance cameras, and deputies released the video to the public later Saturday. The public is encouraged to help identify them.

The man is described as 6 feet tall, in his 30s and was wearing a yellow hat, teal shirt and shorts. He’s the one with the gunshot wound to the buttocks.  The woman is 5 feet 6 inches, with long hair and was wearing dark clothing, and was carrying a backpack.