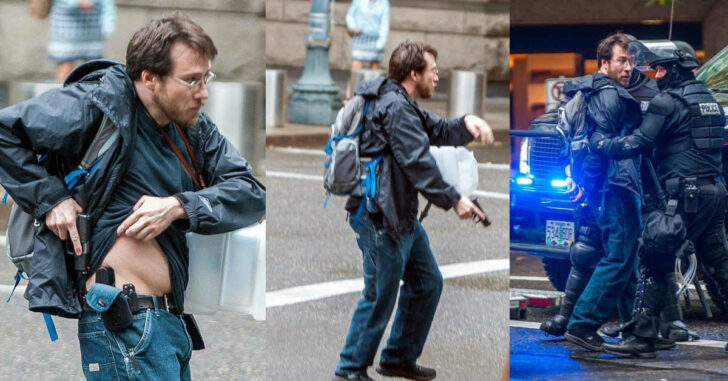 PORTLAND, OREGON — Prosecutors successfully argued before Multnomah County Circuit Judge Thomas Ryan that concealed carrier and independent videographer-journalist Michael Aaron Strickland, 37, did not have reasonable fear of his own life when he pulled out a semi-automatic pistol and attempted to withdraw from a Black Lives Matter and Don’t Shoot Portland demonstration.

According to Oregon Live, Strickland was found guilty of 10 counts of unlawful use of a weapon, 10 counts of menacing, and second-degree disorderly conduct. Sentencing for Strickland’s trial begins in May.

This case had plenty of video evidence. Strickland, himself a videographer, had recorded parts of the incident in which he was surrounded by members of two organizations and allegedly pushed around and given express threats to harm his life.

At one point, he drew his handgun and told those blocking his exit to “get back!”

No shots were fired and he did not resist Portland police when they arrested him. He was legally licensed to carry a handgun.

We’re not lawyers but I picked out a law that the prosecutors likely used to dismantle Strickland’s case.

(1) Committing or attempting to commit a felony involving the use or threatened imminent use of physical force against a person; or

(2) Committing or attempting to commit a burglary in a dwelling; or

In order for Strickland to walk away from this scene, the prosecutors needed to prove there was no chance anyone in either crowd of protesters was about to commit a felony involving physical force against Strickland.

Apparently, they convinced the judge.

Before we hear the arguments about he never should have been there to begin with, let’s also consider that Strickland’s occupation may require him to cover active demonstrations. There is no legal reason why he can’t be at those demonstrations so long as he is not provoking the crowd or otherwise violating the law.

Oregon also has a weird interpretation of its legal definition of use of force or deadly force.

This type of wording is horrible for law. What one man believes is completely reasonable, another may find to be unsuitable.

Strickland is getting hamstrung.

Even if he manages to avoid serious prison time — which doesn’t appear to be the case — he’s never going to be able to legally possess firearms again.

That’s an exceptional loss for covering a news story.

News reports suggest that Strickland was being called names, pushed around, and probably had a reasonable degree of fear for his well-being. None of those things, though, stood up to the prosecuting team’s arguments that he overreacted and used excessive force.

This is something concealed carriers REALLY need to become aware of — especially as we head into more tumultuous and ridiculous times.

As sad as it is to say, Strickland is going to get comfy in Oregon’s state prison system. As concealed carriers, we can EASILY avoid a similar fate by simply knowing the law. The law is what we are tried upon. Regardless of our own personal ideas of how we feel society should operate, all of that means nothing when you’re standing before a judge. The judge doesn’t care. Your family certainly will.