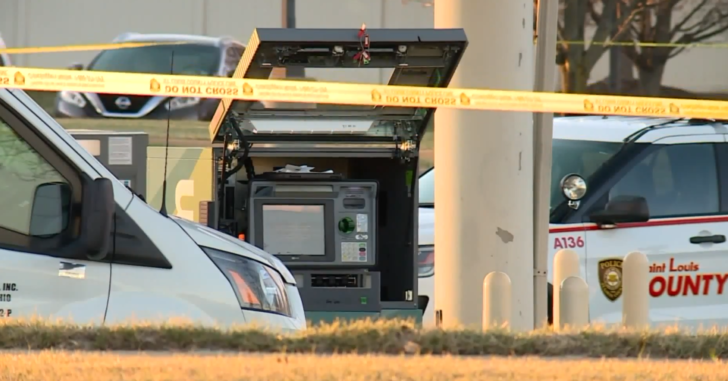 ST LOUIS COUNTY, MISSOURI — The early reports of this incident claimed that the machine was being filled by a technician. Initial reports were confused as to who shot one of the armed robbers. However, it was later determine that it was armed security filling the machines, and were the ones responsible for fending off the robbers.

Two security guards filling an ATM with cash fatally shot one of the masked men who tried to rob them in the parking lot of a credit union, police said Wednesday.

The dead man was identified as Jordan Pruitt, 19, of the 4800 block of Persimmon Bend Lane in Black Jack. His accomplice got away, police said.

The two armed guards who fired their weapons are cooperating with investigators, police said. Panus declined to identify the guards.

It was quite brazen of these robbers to think they could pull this off. Yes, it is probably easier to rob an ATM then trying rob an entire bank. However, could they have believed that the guards were not armed? Have these guys not hear of armored trucks with armed guards picking up and delivering cash?

Unless they thought that they could get the jump on the guards and the guards would just roll over, I guess. However, that was not the outcome. Both guards were armed and apparently take their job very seriously. They opened fire and exchanged shots with the two robbers. One robber was shot and killed, and other got back in the car and took off.

Well-trained armed guards have proven to be an effective safeguard against armed bad guys. When the issue of school security comes up, armed security is often mentioned. What do you think? If armed security is used to guard our money, what about our schools?

Previous article: 2 Dead, 15 Injured In Kansas City Bar Shooting, Suspect Stopped By Armed Guard Next article: Whole Family Fights Back Against Home Invader, Shoots Him With His Own Gun