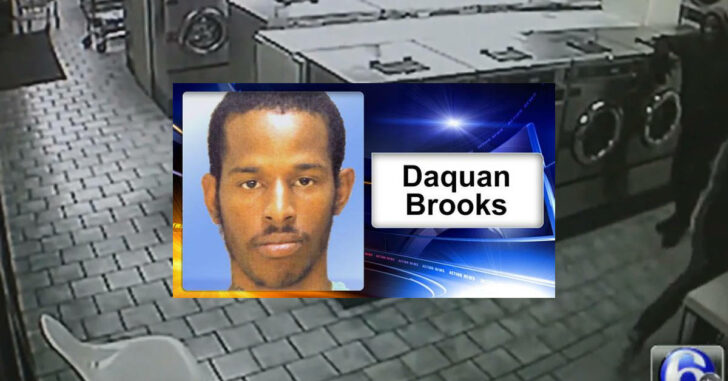 UPPER DARBY, PENNSYLVANIA — A woman working in a laundromat was forced to wrestle a gun out of the control of an armed robber who attacked her. She was able to grapple for control of the gun and attempted to flee before shooting him.

“I was scared. I was in fear of my life. I had to do what I had to do. I arm-wrestled him to save my life,” the victim said.

Surveillance footage corroborates this woman’s heroic fight to save her own life from a man intent on doing her harm. The armed robber is believed to have attempted to rape and rob her while she was in the restroom. Thankfully, she was able to flee across the street to a 7-eleven store. She contacted police and they picked up 23-year-old Daquan Brooks only a few blocks away from the scene of the crime. He had a gunshot wound that matched the description given and was taken in and charged for aggravated assault and robbery.

Police laud the woman’s resolve and stood behind her as the news featured her situation.

According to 6 ABC Action News, this wasn’t the first time she faced down an armed robber. In one other instance, she had a 14-year-old boy point a loaded handgun at her. This event has traumatized her and she says she is considering changing professions.

Undoubtedly, she did more than anyone could expect of her in that situation. It’s always good to see the victim able to overpower her attacker and make it out alive.

But before giving up, there is one other alternative: getting a gun.

Obviously, this woman has the mettle to face down an armed opponent. The next step is getting a concealed carry permit in Pennsylvania and using it to carry a concealed carry handgun at work. If her employer won’t allow that — after these two most recent events — then she’s right to switch professions. But outside of that, if she leaves, it will just be another unsuspecting employee that becomes the next target of violent crime in that area.

Brooks wasn’t afraid to do harm. What’s to say the next bad guy will be any less inclined? Sometimes, it’s just moments like this that remind us why we carry a handgun every single day. It’s not just the business anyone’s worried about — it’s a person’s own life.