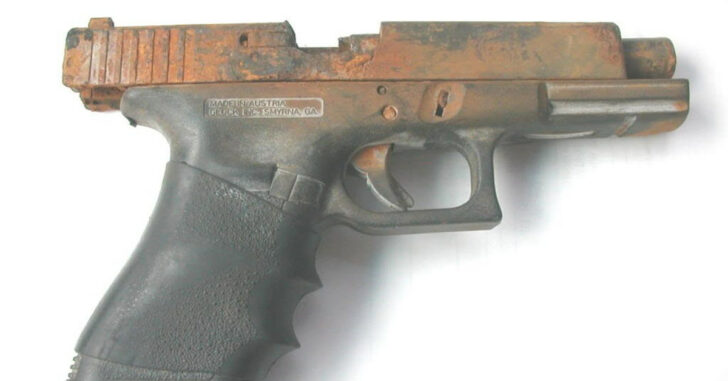 Most modern firearms are anodized with a coating that protects against surface rust from forming. However, even anodized and blued surfaces have their limit. In this article, we’ll talk about some simple strategies to removing surface rust from a handgun.

3 Things To Avoid When Removing Rust From A Handgun

There’s a lot of misconceptions floating out there about rust removal from firearms. Here are the top three tips for things to avoid when removing rust from your firearms.

The reason why you shouldn’t use oil or lubricant is because as you scrape off the rust, the iron oxide turns into particles that are more abrasive than the gun’s coating. There’s a much better way to do remove surface rust. We’ll get into that later on in this article.

Whenever a cola contains phosphoric acid (H3PO4), it can be used to remove rust (FeO) from steel and iron if you let it soak overnight.

The reason why it’s a good idea to NOT do this for firearms is because guns are a bit more complex. There may be small rubber or polymer internal components that degrade in phosphoric acid.

Also, colas like Coca Cola or Pepsi contain a lot of other ingredients which can gum up the works.

Materials have different levels of hardness. That’s why road workers use diamond tipped drills to cut through asphalt. It’s also why when man began using iron and steel in crafting weapons, it was immediately more superior than bronze.

Bronze, brass, and copper are all less abrasive on steel than steel.

If you are not concerned with the finish of the gun, then you’re free to use #0000 steel wool on the surface rust. However, if you are worried about the final integrity and look of your gun and don’t want to go through the process of applying a new coat, use a dry brass or copper brush. In the next section, we’ll discuss a good way to do that.

How To Remove Rust From Handguns

Rust forms when iron interacts with oxygen. It’s a slow process but it can be sped up by things like exposure to salt and water. But, when you see rust, it’s a good idea to assume there’s more than just rust lining the surface of the gun. There could be a variety of salts.

Salts are very abrasive. They can destroy steel and degrade polymers and rubber.

If you recover a gun that is coated in rust and dirt, the very first thing you should do is check to see if it is loaded.

Pointing the gun in a safe direction, attempt to eject the magazine and pull the upper receiver to the rear and lock it. Visually inspect the chamber to ensure no brass or bullet is stuck in the barrel.

If you’re able to do this, you’re already in good shape. For the purposes of this article, we’re going to be looking at rust removal on an unloaded pistol or revolver. The tools I personally recommend for rust removal on a handgun:

If the handgun does not readily disassemble but is confirmed to be unloaded, start by removing surface salts, rust, and dirt with a clean, dry cotton cloth. Get the gun as dry as possible.

Because a lot of pistols contain polymer, it’s important to separate the polymer pieces from the steel.

For guns with polymer lower receivers and trigger housing groups, don’t use copper brushes and wool on them. Copper is harder than many polymers, so don’t use copper wool or a brush on the polymer pieces. A clean, dry cloth should suffice for surface sediment on polymers.

Keep polymer components separate from the steel ones. You want to keep the steel components completely dry during the hardcore rust removal process.

Once the main polymer components are separated from the steel ones, use a copper brush to remove surface rust and dirt. Particles of rust, dirt, and salt can embed themselves in the brush and act as an abrasive on the coating. I recommend you shake out the brush after a few swipes depending upon the amount of rust on the gun.

Use a clean, dry cloth to remove surface rust that accumulates after scraping with copper wool and brushes.

If rust has seeped into crevices that neither a copper brush nor a piece of copper wool can reach, you may consider using a copper pick and cotton ear swabs. Use the pick to gently pull rust from the crevice and then the ear swab to pull the loose rust particles from it.

This may be a time intensive process. But, at the end, you can preserve the finish on the gun and minimize causing any further damage to it during the cleaning process.

After the handgun is completely clean, there are cleaning lubricants you can use to help remove carbon and other grit — but this should only be done after rust has been scrubbed from all steel coated surfaces.

#4) Once all components are clean and dry, reassemble and store

Once both your polymer and steel components are completely dry, you can reassemble the pistol and store it in a dry place.

The easiest way to prevent rust from returning is to wipe down all surfaces of the gun with a dry cloth. The accumulation of moisture — especially salt water — accelerates the oxidation of steel and iron surfaces.

The drier the gun, the less opportunity there is for rust to form. If you put unused handguns in a safe, consider placing a desiccant in the safe. Desiccants can remove excess water from the air.

So, the principle lesson in preventing rust is to keep it as dry as possible. Regular cleaning and maintenance — to the order of once or twice a month — should be sufficient for most people.