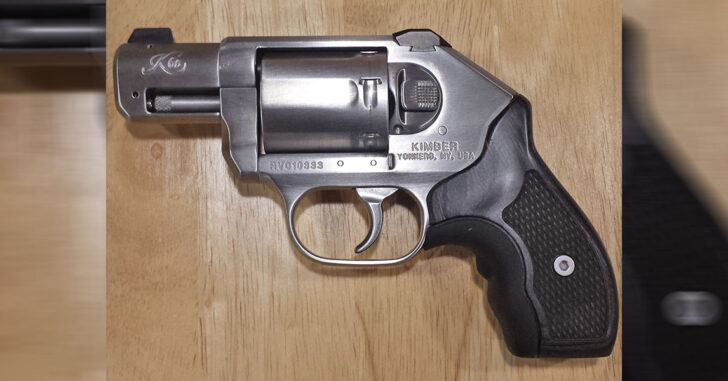 Let’s step back in time to Shot Show 2015 as I clearly recall the enormous buzz about Kimber’s first revolver called the K6s. Kimber hit the ball out of the park with this beautiful six shot .357 Magnum snub nose revolver.

Thousands gathered at the Kimber booth to check it out and Kimber was well prepared for the excitement as they dedicated a large portion of their showcase wall with various grip and finish modifications for the K6s. The area surrounding the wall was as crowded as Walmart during a Black Friday sale as people were pulling triggers spinning cylinders and taking pictures of the new Kimber “wheel gun.” The excitement grew as crowds gathered, knowing full well that something special was being introduced by a company that is world renowned for their high end, superbly functional and outright beautiful 1911 pistols. Being an impatient man, I was drawn to their excellent line of 1911s as I waited for my turn to get an up close look at the K6s. Eventually, I fought through the crowd to check out the Kimber K6s and upon handling it, I immediately thought, “this is much smaller and lighter than I imagined.” Kimber packed six .357 rounds into the cylinder of a revolver that weighs just 23 ounces. The Kimber K6s is the world’s lightest production six shot

.357 Magnum revolver. A couple models had mirror polished finishes with amazing rosewood grips that screamed of class. Others had a sharp brushed stainless steel frame with rubber grips that felt as functional as any revolver I ever handled. They also had a model with a black wood grip with rubber “Crimson Trace” lasergrips called the K6s Stainless (LG). The K6s (LG) is the revolver showcased in this review. All of the models feature a smooth non stacking 10 pound trigger, a two inch barrel and a three dot sight picture that’s consistent with most semi auto pistols. It was clear that Kimber designed the K6s to suit the needs of the concealed carrier who was looking for a lightweight power packed EDC revolver. As mentioned, the Kimber K6s featured here is the LG (Laser Grip) model. The grip is primarily a black slate wood grain grip with diamond checkering on the side panels. The front of the grip has a strong non slip rubber piece that not only feels tight with superior ergonomics but also activates the laser located on the right side. The backstrap has vertical serrations that provide a strong purchase and offsets the black wood grips giving it a beautiful look. The power switch for the Crimson Trace laser is on the bottom right side of the grip. It’s a small switch that is intentionally tight to manipulate. Simply by using a fingernail on the switch, the user can turn the laser on and off. As for the laser itself, it is a strong, solid red beam, which is factory sighted in at 50 feet. The laser is adjustable for both windage and elevation by using a small allen wrench, which is included. The laser beam aligns perfectly with the front sight so I found no reason to adjust it.

The K6s has rounded off edges, which makes for a snag free design, ideal for those who pocket carry. The hammer is completely enclosed in the frame for two specific reasons. First, it’s a double action only match grade trigger system. The elimination of an exposed hammer allows the user to draw the revolver from a pocket without worrying about unintentionally cocking the hammer. Kimber states the double action trigger pull is factory set at approximately 9.5 – 10.5 pounds which is a little lighter than most double action revolvers. The match grade trigger has a smooth and steady pull that will feel natural to the seasoned revolver shooter. The second purpose for the enclosed hammer is the position of the three dot sight system. Kimber thought outside of the box and added a sight system that most shooters are confident with. So not only does Kimber use a match grade trigger, a six round cylinder and laser sight grips, they also added a three dot sight system that fits this revolver perfectly. The non-glare brushed stainless finish looks outstanding alongside the slatewood black grips. The custom engraving around the revolver adds a classy touch that is all Kimber. The cylinder release is a deeply serrated push button that is easy to manipulate without altering the grip angle. Kimber also makes a proprietary six round speed loader that compliments the gun. In true Kimber fashion, their speed loader has a nice “K” engraved on top and it’s as functional as any speed loader I’ve ever used. The “snubby” two inch barrel compliments the look, size and weight of the K6s. For all intents and purposes, Kimber took their highly regarded 1911 craftsmanship and applied it to their K6s, which resulted in a very attractive and unique revolver that not many could have imagined.

I had high expectations when I took the K6s to the range, knowing full well the power of the .357 Magnum, but Kimber did not let me down. The recoil was present but it did not detract from the enjoyment of shooting the gun.

It was accurate and controllable. The trigger was consistently smooth and I really enjoyed the three dot sights. I had no problem tagging my 10 inch iron target from 10 – 12 yards away with my first couple loaded cylinders. Also, due to the pouring rain (see video above), the rubberized front strap on the grip allowed me to handle the gun with ease, even when soaking wet. This is not the type of firearm that a shooter would choose to fire hundreds of rounds down range however my 100 rounds of Fiocchi .357 Magnum 125 grain soft jacketed hollow point rounds were eaten up easily by the K6s. If you are looking for a lightweight revolver that is beautiful, functional and built as solid as a rock, the Kimber K6s is for you.

Previous article: #DIGTHERIG - Steve and his Glock 26 in a Galco Matrix Holster Next article: "Don't Make Me Pull My Piece" Robber's Words Right Before Running After Clerk Pulls His Own Piece