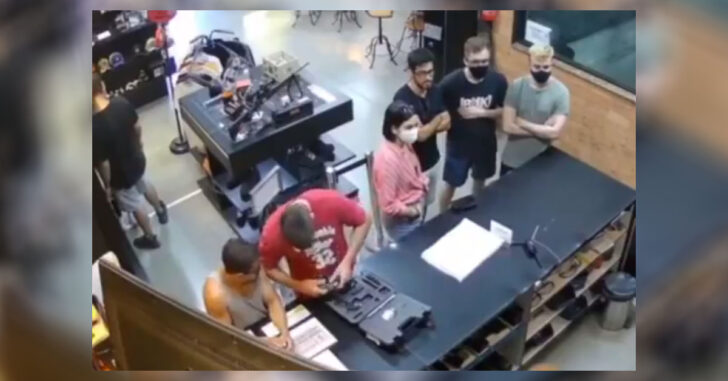 Even if you’re a pro, you always check and double check that your firearm is unloaded prior to depressing the trigger.

The video below show some terrible negligence on the part of a concealed carrier who was apparently trying to teach his friend the ropes. Instead, that friend was shot in the abdomen due to his buddy’s negligence.

Unholstering a firearm at a gun shop is a no-no, and a firearm should never be unholstered unless you’re going to shoot it or you’re done carrying it for the day.

The man in this video obviously isn’t familiar with his firearm, or else he would have known whether or not he truly unloaded it prior to whatever it was that the was attempting to do.

All around, this is one of those incidents that makes all gun owners look bad, and also reminds us that there are people out there who simply haven’t a clue.

At gun ranges and gun shops, I am constantly scanning my surroundings to see what people are up to. If I ever see anything that’s unsafe, I’m alerting the staff and getting out of there.

Think I’m overreacting? Well, I’ve covered enough of these stories over the years to know better.