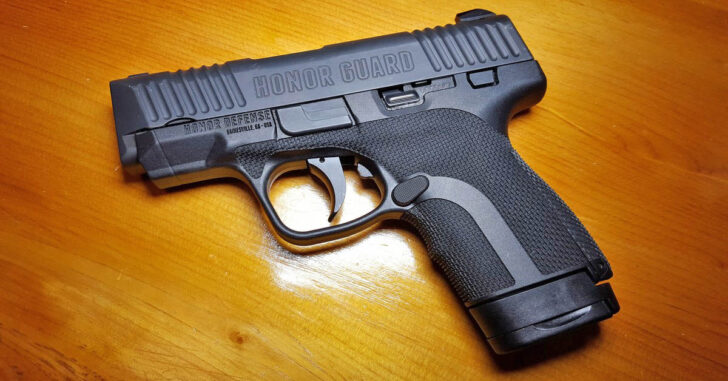 Browsing the /CCW subreddit is always interesting and filled with like-minded folks just like ourselves. I came upon a story that stood out not only for the fact that the man drew his firearm, but because the ending is something that we just recently covered in an article; Should you contact police after drawing your firearm in a defensive situation?

It was about 10:45PM, I had just left the gym and was waiting in the drive thru of a restaurant we’ll call baco tell. There was one car ahead of me at the window, about 6 people crammed in it as much as I could tell, and their food was taking forever. My window was all the way down from ordering, and I could hear footsteps approaching from behind in the gravel.

Looked in my side mirror and saw one young adult male kind of half-running (and I thought maybe skipping?) Between the bed of my truck and the building. He was yelling “I DONT EVEN KNOW YOU, STOP DUDE” over and over. He passed my window and at that point I saw another male around the same age chasing behind him with a wooden baseball bat, beating him repeatedly in the ribs and side of the neck.

The two ran in front of the car at the pickup window and out onto the main highway, at which point the man being chased stopped running and turned to plead with the aggressor, he was sobbing and holding his side with both hands.

The man with the bat reared back immediately and took a huge swing directly at the side of his head, which he luckily was able to duck underneath but this put him in a really compromised position sort of kneeling.

Meanwhile, I had already drawn my pistol inside the truck, and was just waiting to see where the situation was going before I made a decision about whether or not to intervene. My original plan was to call the police and just monitor events, but that huge swing at the head and follow up blow to the back as he was practically on the ground defenseless prompted me to hop out and bring my pistol up to a low ready position, pointed about one foot in front of the aggressor at the pavement.

I was no more than 5 yards from the two. He stopped swinging when my truck door opened and looked towards me. He locked eyes with me first and then glanced at the pistol, at which point he let the bat fall kind of limp in his hand but didn’t drop it. I told him to get away from the other guy and to put the bat down. He walked to the sidewalk still about 5 yards from me and flung the bat down in the flowerbed beside the drive thru.

At this point he started talking to me about how the other guy had struck his sister in some sort of domestic incident which I presume is what prompted the attack. I reasoned with him about how badly he was going to fuck his life up by going out looking for revenge like that, mostly just trying to bring him down a little. He picked up the bat and walked away, around the other side of the building.

I waited a moment then holstered my pistol, and walked out to help the injured man back to the sidewalk. He maintained that he didn’t know the bat guy and had no idea why he was attacking him. As if per some sort of fucked up cosmic que card, this skinny 7-month pregnant young lady with a massive shiner (black eye) stumbles around the corner where the bat guy walked off and she is totally inconsolable.

She embraces injured guy and is checking his face and neck and ribs and sobbing all the while. Not wanting to encroach upon this tender moment, I hop back in my truck and wait for the police to arrive.

They showed up minutes later, (I did not call them, as I trusted the cashier who’d been screaming IM CALLIN THE COPS out the window had probably called the cops)

Now here is the only part of my tale that I’m a little hesitant to tell but it’s just facts. Sitting in the drive-thru, I had a long internal struggle about what I was going to say to the police or if I even needed to say anything at all. On one hand, I know that it would be the absolute best thing to do in the situation. I was well covered under the defense laws in my state, I live in a constitutional carry state, and ultimately I didn’t fire a shot, though I was prepared to. My girlfriend was waiting for me to pick her up at work in the middle of nowhere, and so I decided on this course of action:

I rolled by the officers talking to witnesses slowly and rolled down my window fully. I stopped and one of them looked at me. I asked simply and plainly if they needed anything from me, and he waved me off and said they had plenty of statements.

And so I drove off. That was 3 days ago. I want to hear your opinions about how I should have handled the police aspect differently and why. Thanks.

We appreciate it when people share stories like these, as it’s sometimes a grey area. Coming forward, even anonymously, is great for our community so that we can discuss what others think they would have done in this exact situation.

So, given the details, would you have told police of your involvement in the incident? Share your thoughts in the comments below.