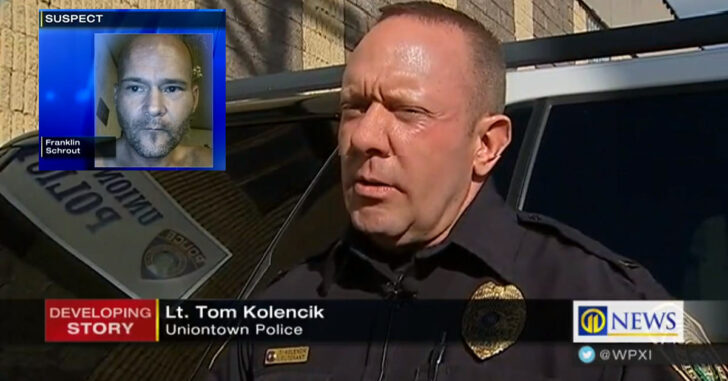 UNIONTOWN, PENNSYLVANIA — An 81-year-old man in charge of taking care of his bedridden sister was forced to use a handgun to defend himself from a violent felon who broke into his home. The initial struggle occurred when 46-year-old Franklin Schrout, of Smithfield, rode up to the residence on his bicycle and broke in. It ended when Schrout was fatally shot once by a .22-caliber handgun the elderly man had kept for thirty years.

According to Uniontown police speaking to WXTI, Schrout told the man to give him money and valuables. When the elderly man said he had nothing to give, Schrout began ransacking the house. The homeowner tried to stop him but was attacked in the struggle. He managed to retrieve a handgun and shoot Schrout at close quarters. Schrout escaped the home but collapsed a short distance from the house.

The homeowner’s sister called police. By the time they arrived, Schrout’s body was found dead outside the home. Police consider it an act of self-defense.

“Once the actor came into his bedroom, the actor was demanding to know where money was. He told them he didn’t have any money or anything of value in the home,” Uniontown police Lt. Tom Kolencik said. “The only thing he told us was that he had to protect himself. He also lived with an elderly sister, who is bedridden, so he just kept referring to protecting her, protecting himself.”

Although no criminal charges have been filed against the homeowner, the District Attorney’s office will have the final say. That determination could take months to arrive at but, from the looks of this case, it’s a pretty open-shut self-defense scenario.

As we’ve commented in previous articles, it can take months for the District Attorney to determine self-defense even if it’s blatantly obvious. In the case of home defense, most District Attorneys tend to side with the occupants of the home so long as there are no extenuating circumstances that would preclude that decision.

In this case, it appears a dyed-in-the-wool bad guy blatantly broke into a home in search of valuables and not at all concerned with the well-being of the occupants. The homeowner admitted he had no choice but to shoot. He stated he was not physically strong enough to repel the intruder. That’s nothing to be ashamed about. He did what he had to do.

It doesn’t matter if you’re 81 or 21, you shouldn’t have to feel like you need to use physical hand-to-hand force to repel an intruder. It’s your home. You’re entitled to feel safe within it. Self-defense and personal protection are universal rights — they’re not something granted by courts and law. To defend yourself and your family within your own home is something unilaterally seen as a human right. This man used a gun he never thought he would ever need to do it. Just goes to show, it doesn’t matter how many years that gun sits there doing nothing — the second you need it, it’s there.

Previous article: Bad Guys Picked The Wrong Clerk To Mess With -- Now They'll All Face A Jury Next article: A New Way Of Thuggary; Be Careful When Answering The Door This Holiday Season