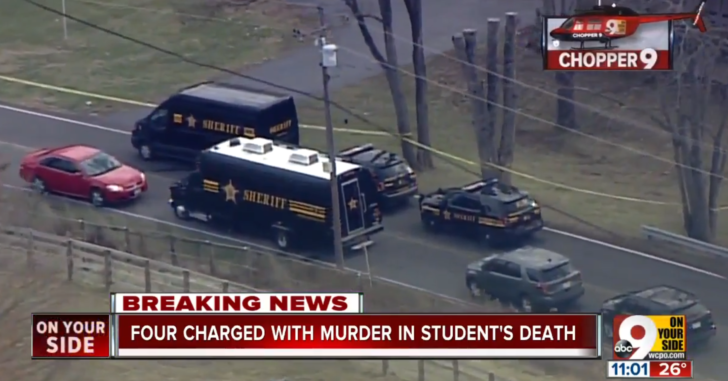 TURTLECREEK TOWNSHIP, OHIO — Five Ohio teens hatched a plan to lure, attack, rob, and kidnap a man. They brought with them a baseball bat and a firearm as their tools for the job. What they weren’t expecting was that their intended victim would be armed and ready to fight back.

According to a press release from the Warren County Sheriff’s Department, 18-year-old Dakota Cox of Kettering and four other teens, including Trudics, planned the robbery and kidnapping of an individual the night of Dec. 13. The individual was lured to a residence in the 1800 block of Oregonia Road in Turtlecreek Township.

According to police, upon arriving at the address, the individual was threatened with a bat and a firearm. Deputies say the subject then defended himself against attack with a firearm and in the ensuing battle, Mason Trudics was shot and killed and a 16-year-old was critically injured by gunfire.

Despite the fact these these ambushers were kids, they did come prepared with weapons and a plan. They lured the victim to a house where they were waiting to ambush. When he arrived, the five teens confronted him with a firearm and baseball bat. All we know after that is the intended victim drew his firearm and fought his way to safety.

The shooter fatally shot one of the teens, and wounded another as he escaped. The four remaining teens went to a neighbors house for help while their dead friend was lying on the ground. They pounded on the windows and screamed until the neighbor called 911 for help. When the police arrived, it didn’t take long for them to sort out what had happened.

The four teens are all being charged with murder in addition to a number of other crimes; including attempted kidnapping. Because a death occurred during an armed crime attempt, the murder charges apply to the boys. Who knows why they wanted to kidnap this man, or what they intended to do with him afterwards. Now, the boys will most likely be spending their prime years behind bars.

As for the armed citizen, he was questioned by police and later released. No charges have been filed against him.