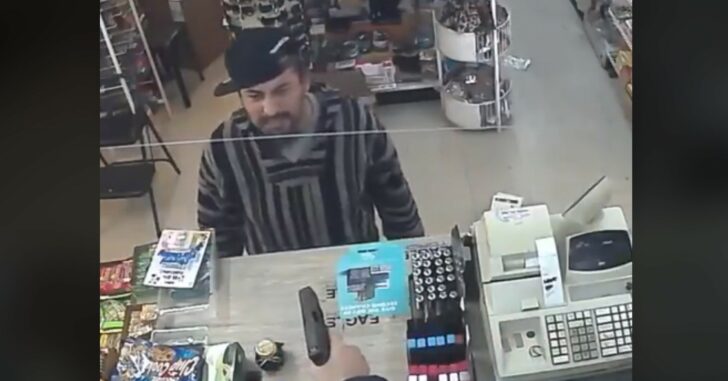 When a threat leaves, get yourself to safety. Lock the doors if possible, call police, and make sure that you’re somewhere safe. If the bad guy comes back, this will help you survive a second encounter.

A Pomona man is behind bars after firing a rifle at a discount store where he became enraged over an aerosol spray can he apparently wanted to return. This security footage released by @pomonapd shows Angel Valenzuela, 39, was furious when the clerk refused to accept the item. He first throws products at the employee, but then goes out to his car to retrieve the firearm. Valenzuela wound up firing two shots, but the clerk wasn’t struck, police say. On Thursday, Valenzuela was handed a 3-year prison sentence.

The video below shows the encounter, and it’s pretty tense to say the least.

I’m not sure what else, if anything, led up to this altercation. I will say, though, that the clerk should be having both of his hands occupied in ways to ensure his safety. That being said, he should drop the phone and stop recording video, as the cameras inside the store are already doing that for him.

After the threat leaves, your safety is still the number one priority. Make sure that your brain is still in the fight even after you think the threat has left the building.

Previous article: Enraged Father Chases, Cuts Down Carjacker Who Accidentally Kidnapped Son Next article: [WATCH] Armed Robber Walks Into Shop Filled With Armed Employees, Then Shot In The Back By The Owner's Armed Wife