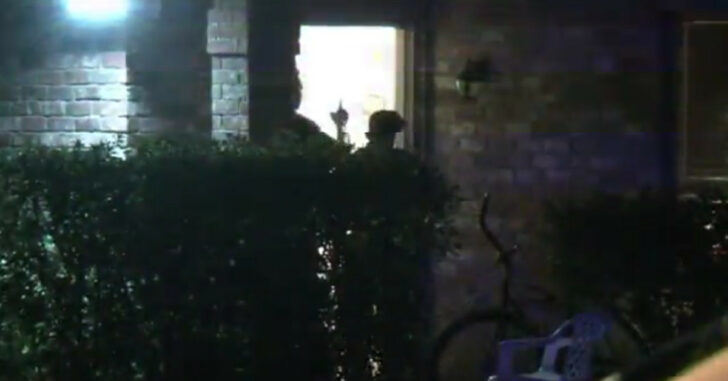 HOUSTON, TEXAS — Three intruders attempted to gain entry to a home with three adults inside. A father, mother, and a son were gathered around on Christmas Eve when they heard one of the suspects break a window.

The home was equipped with surveillance cameras and, when one of the intruders entered the home, he was quickly met by deadly force by the son. That suspect died at the scene but, according to police and the surveillance footage, his other accomplices managed to escape.

“The son takes out a weapon, fearing for their safety, and fires his gun at the suspect,” said Houston Police Sergeant Joshua Horn. “We were able to take a look at the surveillance and we saw at least another young male with this male attempting to break into the home.”

Now, this wasn’t a “soft target” burglary. It’s Christmas Eve, there were cars parked in the driveway, lights were on, and there was a surveillance system. Either these three burglars were absolute idiots (one was, obviously) or they intended to use force once they got inside.

This wasn’t a case of, “oh crap, someone’s home.” This was, “let’s go in and rob these people by force.”

When bad guys decide your house is the prey, there’s only one thing that’s going to slow them down or stop them outright: force.

If these burglars had picked a home that didn’t “believe in firearms”, this family’s Christmas would have been ruined. That’s putting it as lightly as I can.

The best defense against this is precisely what this family did.

This lets you can see just how many bad guys you’re dealing with and where they are. Plus, it’s footage you can use to help police identify bad guys who realized they made a mistake and ran.

There’s nothing weird about carrying a gun around the house — especially if it ends up saving your life.

The more family members that can help you deal with intruders and bad guys, the merrier.

This family likely had a traumatic evening but ultimately, they were alright. Bad things can happen to anyone for any number of reasons. It’s not your fault violent intruders picked your home. It is your fault if you’re not prepared to deal with them.

Hope you all had a wonderful Christmas and a safe New Year!

Previous article: Christmas Weekend In Chicago: At Least 27 Shootings With 7 Fatalities Next article: Pro Tip: Don't Try To Rob The Owner Of A Gun Shop