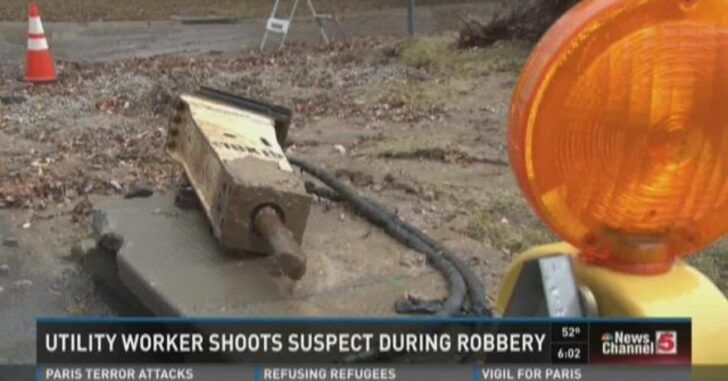 ST. LOUIS COUNTY, MISSOURI — A utility worker for ADB Utility Co. fatally shot an armed robber after the robber ordered him to retrieve his belongings from his work truck.  The St. Louis Post-Dispatch reports that an armed teenager held up his two colleagues as they worked to repair water lines in an unincorporated area of St. Louis county.  While both utility workers complied, when the robber turned his gun on the third, that’s where he made his fatal mistake.

The teenager, Antonio Moore, 17, used an illegally obtained handgun to threaten the lives of three men working to repair a water main.  What he didn’t count on was that the third would have a handgun stored in his truck.  The third worker retrieved his handgun and delivered one shot directly to the chest of Moore.  Moore was presumed dead on the scene.

According to St. Louis county deputies, the utility worker is cooperating with police and a firearm was retrieved from the possessions found on the armed robber.  KMOV reports that the St. Louis county authorities are looking at this as a case of self-defense.

It’s always tragic when a youth gets shot but it’s also important to note that unfortunately, adult decisions have adult consequences.  Robbing three utility workers on the side of the road is about as idiotic as it gets — something done by either the truly desperate or the truly stupid.  In this teenager’s case, it’s the first and last mistake he’ll ever make.

Previous article: Terrorists In Paris May Have Met Armed Resistance During Attacks, But Not From Law-Abiding Citizens Next article: A New Way To Store Your Firearm While You Sleep