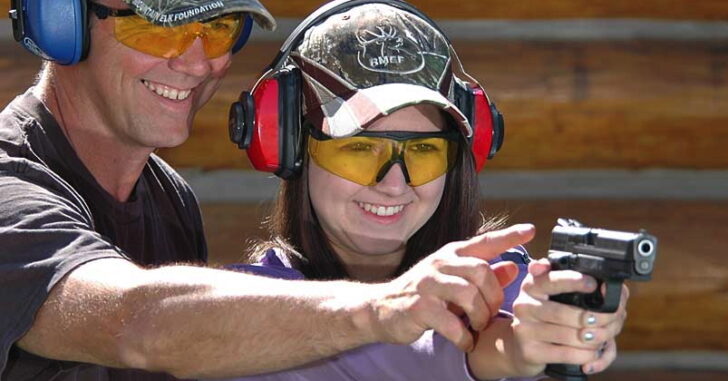 If you’ve been reading Concealed Nation for any length of time, you’ve probably noticed we like to make lists of popular concealed carry handguns.  We go into the merits of them, discuss what they bring to the table, and do what we can to bring some knowledge for the curious.

Recently, we asked on Facebook what were some topics that people would like answered. One person asked about concealed carry handguns that would be appropriate for his daughter in college.

Everybody’s daughter is in a unique situation.  And there are plenty of variables such as living conditions (dorms versus apartment), roommates, lifestyle choices, and local laws governing “gun free zones”.  We’ll do our best to take a broad brush stroke over this question.

When Purchasing A Handgun For Someone Else…

In general, if your daughter is under the age of 21, she probably isn’t able to purchase a handgun on her own.  So, she’ll likely be in her junior or senior year of a four year education before she’ll be able to walk into her local gun store and pick out a handgun.

If you attempt to purchase your daughter a handgun on her behalf, you’re going to run into a little pickle while filling out ATF Form 4473.  Specifically, the question of 11.a.

So, as it stands, purchasing a firearm on your daughter’s behalf — especially if she’s under 21 — will present you with a challenge.  If you think you’re going to get around that by first purchasing the handgun for yourself and then privately transferring it to your daughter, you may want to check with your state’s rules and regulations governing this.

As long as you and your daughter physically reside in the same state, and there are no specific state laws prohibiting that private transaction, you are good to go for private transfer of a firearm.  Don’t take our word for it — that’s the advice of the ATF.

“So What Firearm Is Best For My Daughter In College?”

The best answer for this is: the one she is comfortable using.

Before your daughter should get a handgun gift-wrapped to her, like any other person, she should be trained to use firearms responsibly.  And if she has been trained to use firearms responsibly, then the next best step is to offer to take her to a range where you can rent an assortment of pistols and revolvers.  This is absolutely the best way for getting a gauge on what she feels comfortable using.

If you end up spending almost the price of a used handgun on just ammunition and renting different firearms, it will probably be money better spent than simply choosing one out of the case and saying, “here you go.”  Safety is an investment and its rewards are in the future.

Some women handle larger calibers better than others.  Your daughter may be one of them.  Once she tries a few variants, she’ll know what she’s comfortable with.

In addition to a variety of ammunitions, there’s also a variety of firing mechanisms and forms to handguns.  Each presents a slightly different feel.  Maybe a .38 Spl like the S&W Bodyguard is perfect.  Maybe she really likes the feel of a Glock 23?  There’s only one way to find out.

She knows her living situation, her roommates disposition, and her friends probably better than you do.  Every person’s maturity level is different but generally speaking, your daughter probably has an idea of what she’s up against in terms of the stability of her roommates, friends, herself, and others she may encounter.  When possible, let her engage you about what types of handguns interest her.  Ask her questions.  Let her experiment.

Does she feel comfortable carrying on campus?  Does she want to carry at all?  These are decisions she has to make and stick to personally.  If she just nods her head and you get her set up with a handgun that she’s not comfortable using, that’s pretty much a wasted investment.

Becoming a first-time concealed carrier can be a bit intimidating.  There’s usually a lot of paperwork, a time commitment to attend training, and even a waiting period.  Afterwards, though, your daughter will have a better understanding of the responsibilities of being a concealed carrier and may have the ability to legally carry a handgun in many places she otherwise couldn’t.

So, in summary, we’re not going to tell you what gun to get your daughter in college but we will give you some things to think about in terms of equipping her for success out in that big, weird world.