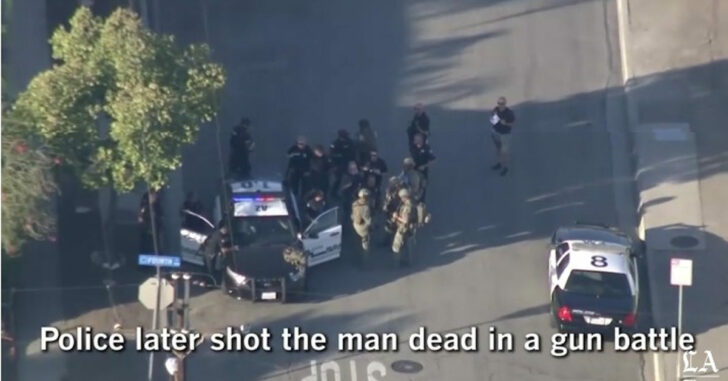 LOS ANGELES COUNTY, CALIFORNIA — A cocaine-addled madman opened fire on Los Angeles county residents going towards a nearby polling place during the Presidential Election. After reportedly killing one person and critically injuring two more, he engaged police in a tense stand-off before they shot and killed him.

We can contemplate the horror of this situation but we can also be reminded that California has strict laws against people carrying a concealed firearm in vicinity of a polling station — peace officers included.

This took the power away from everyday citizens to fight back and defend themselves in their own neighborhood.

via the LA Times

“I just ran inside,” Fabiola Morena, 47, said after the man stopped to reload his weapon and glanced her way. “I secured the door, grabbed my granddaughter and ran into the bathroom, and we locked ourselves there.”

In a previous article, we discussed strategies to handle emergency situations. They do include evading, barricading, communicating, and ultimately responding. We definitely recommend people follow this basic protocol when dealing with an unhinged person using lethal force against targets of opportunity.

However, when you take the right to carry a concealed firearm away from law-abiding citizens, you are consigning them to be defenseless in the face of murderous rage.

This dude is dead, now. It took police time to cordon off the area and work their way to him. He exchanged fire with them and died. That’s the end of his story. Unfortunately, the wake of destruction left behind will certainly mar the memories of quite a few Los Angeles county residents.

Polling stations in California have strict laws to ensure no one is authorized to carry a firearm unless they have express consent of the officials overseeing that process. This includes peace officers.

That means, even if an off-duty officer was in the area, he would have been unable to respond with a firearm of his own. As we’ve discussed in countless other shootings, many of these people orchestrating these shootings are cowards. They target people who either don’t have the legal authority to carry a firearm or simply wouldn’t.

That’s because there’s nobody to fight back against these sick people’s aggression.

It’s pretty simple, unfortunately. A coward decides to pick up a gun and engage civilians. No one has a legal right to carry so the probability of a law-abiding citizen being armed drops close to zero. Now, people are stuck scrambling for cover instead of organizing a meaningful resistance against their aggressor.

That’s a horrible situation. It gets fixed by first having enough trust in your citizens to protect themselves. Let’s hope we don’t have to learn too many more of these lessons before this gets fixed.

Previous article: How To Never Have A Negligent Discharge Next article: Concealed Carrier Stops Stabbing Spree At Apartment Complex