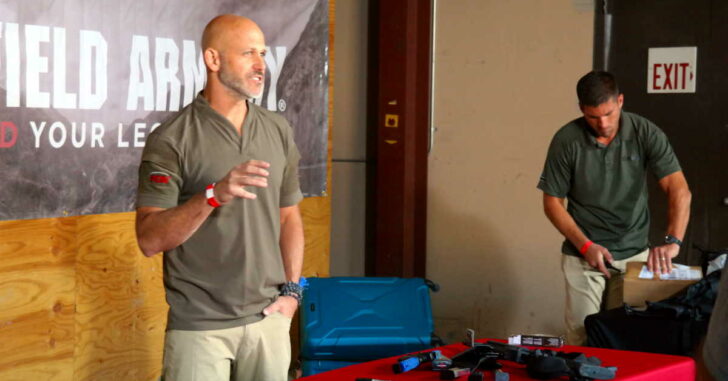 I had the privilege of getting to hear Pincus speak at a Springfield Armory sponsored event at the Pro Gun Club outside Las Vegas, Nevada. Springfield Armory invited over a dozen firearms writers from various backgrounds to get to see their new Saint AR-15 and XD(M) OSP 9mm handgun. They wanted to give the writers the option of not just firing both guns at a range but getting to move with these firearms through simulated exercises.

For that, they invited Rob Pincus and his crew from ICE Training Company to talk and give some instruction.

Rob Pincus is known to anyone who watches Personal Defense Network’s videos. He’s been in the defense and protection industry for over twenty years and he’ll be the first to tell you that training evolves with experience.

“When I gave training advice in 1997, it was ‘take a bladed [weaver] stance and level off against your attacker’,” Pincus explained to the audience at Pro Gun Club. “In 2016, it’s evolved. We can only teach what we know. And the [instruction] keeps evolving from that.”

Pincus demonstrated not just an advanced understanding of handgun self defense techniques but also how to apply them to a civilian setting.

“One of the things that I fight against in the industry, is that a guy gets out of a long law enforcement career — or even a long military career — and ends up teaching CQB [close quarters battle] house clearing to a husband and wife team because that’s what he did in Afghanistan.”

One of the things Pincus doesn’t do is tell you what to do. This may seem counter-intuitive because it’s a training environment. We’re expected to go through a course of training and execute what we’ve learned, right? Well, according to Pincus, wrong.

“We’ve instructed law enforcement and military for many years and every time we get an email back telling us something we’ve taught them has saved their life,” Pincus responded to a question from the audience. “The first question we ask is, ‘where’s the video?'”

Getting videos back from officers who underwent their course was extremely educational for him and his instructors. He described one dashcam video of an officer successfully pulling his handgun and returning fire on an assailant. Pincus made no bones about admitting that the man hadn’t used a particular stance taught through the course but was able to immediately respond.

“He saved his own life,” Pincus admits.

That’s what Pincus said he’s looking to develop in his students — the ability to respond to an assymetric situation.

For a group of firearms writers from the likes of Guns Digest and Guns & Ammo, they seemed appreciative not to be put through one more course that talks down to them. Pincus, if anything, spoke to them like peers. The Strategy On How To Survive Any Defense Situation

Pincus’ description of “reality versus training” is priceless. At its most basic, the system falls into the following methodology:

It doesn’t get much more simple than that, but practicing these habits is crucial.

Evasion means moving away from danger — even if danger may eventually pursue you to your location. Barricade means making it harder for an attacker to access you. This could be throwing a desk in front of a door or drawing the blinds to your household’s windows if a bad guy is believed to be outside. Communicate doesn’t just mean calling 911. It also means letting your spouse, children, and other occupants know where they need to be and what they need to do.

Pincus points out that the following information should be relayed in a 911 call:

At a minimum, this let’s emergency services have some knowledge of the scene before they arrive. This also keeps the bad guy from pretending he’s one of the crowd.

And the last action is ‘Respond’. This can mean shooting an opponent but it doesn’t always need to go to that level. The authorization of deadly force is defined by state law and states do vary on what they consider acceptable conditions for that use. He teaches to respond because sometimes it has nothing to do with a gun.

If someone is swinging wildly, the response could simply be backing off.

If someone is beating down the door of someone else’s home, you can get to a safe distance, call the cops and stay out of view until the police arrive.

You have the ultimate power in any situation and Pincus definitely promotes that. No one can teach you to survive an actual emergency situation. You do that. Pincus tries to equip his students with the practical tools for the job.

The ICE Training Company instructor quickly notes that depending upon the severity of the situation, you may have to jump from one to the other, skipping several inbetween. For instance, in an ambush situation, he admits that the person defending himself is going to be plunged straight into ‘Respond’. A person stuck in the middle of a home invasion may only have time to arm, communicate, and respond.

The point he lays out for the class is that the individual, not him, must not only understand what he is doing but also be able to explain that back to an instructor.

Because reality-based training is more than just hitting a target on paper or moving through a room, it requires problem solving.

Problem solving, Pincus points out, requires a person to think through his or her actions versus just react with a pre-programmed response.

That’s why the ICE Training Company’s reality-based training doesn’t focus on hypothetical race car tracks and rented race cars. He wants people using the firearms they normally carry and learn how to make the most out of that tool.

You can learn more about reality-based training from one of their upcoming courses and we certainly recommend checking out Pincus’ videos on the Personal Defense Network.