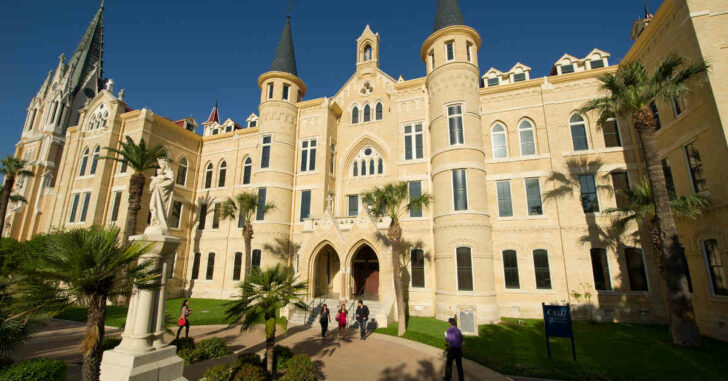 SAN ANTONIO, TEXAS — A man openly carrying a rifle was spotted on private university campus property. This prompted a lock down as students and faculty barricaded in place and called authorities. Despite the panic and hysteria, the man at no point indicated he was a threat to anyone. Police walked up to him and asked him to leave the premises. He complied.

“Campus on lockdown,” the student texted a Patch reporter. “Me, my instructor and three students barricaded ourselves in the studio in the dark. We don’t know what is going on.”

Our Lady of the Lake University is a private institution and has the choice to opt out of the new Texan gun law reforms which allow Texans to carry on campus. The law only applies to universities which accept public funds — something Our Lady of the Lake University does not do. Thus, it’s within their rights to not allow open or concealed carry on campus.

It’s not readily apparent whether or no the man was a student but it is clear that he was trespassing on private land.

When a person or entity owns a patch of land, he has the right to say who can and cannot carry a firearm onto it. If you post a “gun free zone” on your property, other people have an obligation to adhere to that or potentially be cited for trespassing.

A university or business is no different.

There’s nothing wrong with carrying a rifle. In many states, it’s something allowed by law and further, guaranteed by the Constitution. However, as responsible gun owners, we have to acknowledge private landownership. If it’s a business, we’re free to not shop there. If it’s a university, we’re free to not attend. We can’t tell them how to run their respective properties.

The reaction appears to be over the top, though. A man armed with a rifle — okay, so where’s the threat?

Alerting police, pulling the campus into lock-down mode, and having both students and teachers fear for their life as they imagine the worse… Seems a bit far reaching given this particular scenario. We’re not going to antagonize them over that.

As law-abiding gun owners, are we not prepared? Do we not react to threats and dangers?

If anything, the students and teachers quickly barricaded themselves in and exercised good preparation. It’s a drill that should be done but it would have been better to conduct it under different pretenses.

The man with the rifle was not detained nor was he arrested. A police officer walked up and told him he was on private property — a fact he may or may not have been aware of. He was asked to leave. He complied. That ended precisely as it should have.

We all have a choice — where allowed by law. Carry openly or concealed. Concealed carry attracts far less attention. Some people are not educated on gun ownership rights in their own country, far less state. They may react ignorantly to what they do not understand.

We’re not going to make the argument that a person shouldn’t openly carry firearms for fear of provoking ignorant people.

Serving the lowest common denominator is a fool’s errand.

But, we have to be aware that this is a possibility. If anything, hopefully campus security at OLL University are educating themselves a bit more about how to handle these situations before sending everyone into a tizzy.