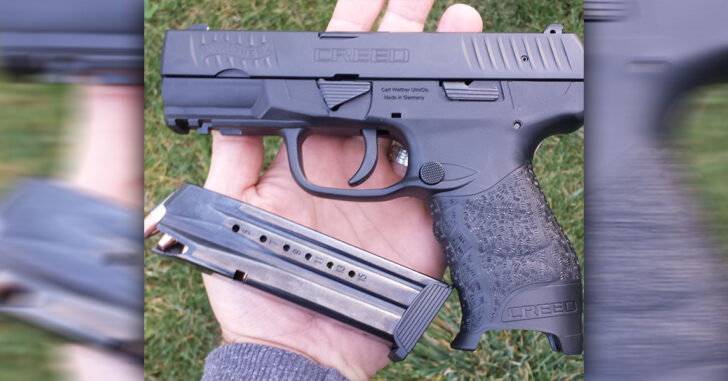 When Walther began to introduce their new pistol, much anticipation ensued over what it would be and what direction Walther would take. Walther fans were excited as the daily puzzle pieces were removed on Walther’s facebook page exposing what would eventually lead to the introduction of the Walther Creed. The name “Creed” was adopted to differentiate Creed from the Walther PP family. They felt the Creed was a great gun to bring people into the “Creed” of Walther. Creed stands for, “a set of fundamental beliefs.”

The Walther Creed is a 9mm compact size polymer pistol that holds 16 rounds and shares the same cross directional ergonomics that Walther enthusiasts have come to know and love. Many have compared the Creed to the Walther PPX mainly due to it’s size. The Creed and PPX mags are interchangeable and work well with each other. Personally, I think the Creed measures well with the PPQ. The Creed is just a little longer in the slide and grip but they share a similar grip feel that I would have trouble telling the difference. Either way, the Creed has it’s own set of features that marks its place in the Walther line of pistols. Let’s begin this review with the price. Walther lists the Creed MSRP at $399. I think that is a great price for a pistol of this quality. As we know, the local gun store price should be lower than the MSRP so I would guess the Creed will be available at your local gun store for around $350. That would put the Creed in a “budget” category without sacrificing budget quality. Watch the range video attached to get a better idea of what I mean. As mentioned, the grip Walther uses on the Creed is the same cross directional, slip free texturing as many other Walther pistols that delivers excellent ergonomics. It has a fixed backstrap that fits my average size hands perfectly. The mag release, located on the left side of the gun is a serrated button that is positioned similar to the PPQ M2 model. When pushed, it delivers a strong magazine deployment for quick mag changes that competitors and self defense training people will enjoy. The mag release button can be switched to the opposite side making the Creed left handed friendly. The grip also has a cutout on the bottom to allow for the serrated magazine base plate that fits flush to be manually removed if needed. The magazine itself holds 16 rounds of 9mm which I consider very good capacity for a compact handgun. The Creed’s trigger, in my opinion, is what sets it apart from other Walther models. It’s a hammer fired pre-cocked double action pull that somewhat feels like a single action gun. The initial trigger pull has a very light take up (pre-cock) then hits the wall until it breaks at 6.5 pounds. Upon the break, it feels like a quick snap of the trigger when firing. The bobbed hammer is slightly exposed at the rear of the slide. I find this action to fire very quick making rapid shooting and double taps immediate and energetic. At this point, I cannot pick which trigger action I prefer more between the Creed and the PPQ.

The slide has a tennifer black finish with both front and rear serrations. It has that specific Walther look and feel that so many Walther owners have become accustomed to. The top of the slide has a loaded chamber viewport for a quick inspection for the status of a loaded round. The slide stop is located on the left side of the gun and will lock open with an empty mag. The extractor is an internal claw that is located inside the slide. The metal 3- dot sights are low profile and quite large for quick target acquisition. The rear sight is adjustable for windage and the front sight is pinned. The Creed also has a 1913 picatinny rail on the forend of the frame for the shooter’s favorite tactical devices. Disassembling the Walther Creed requires no tools and is easily managed. Once assuring the gun is unloaded and safe, simply lock the slide back and push the front lever down to a vertical position. The slide can be removed from the frame upon release of the slide stop lever. There is also no need to pull the trigger to release. The captured recoil spring/guide rod and four inch barrel are then removed. To reassemble, simply do the same steps in reverse order.

My shooting impressions of the Creed were impressive. It fed and fired 100 rounds of Speer Lawman 124 grain 9mm without any issues. It was very accurate. Right out of the box I was able to hit my 10 inch target with ease from 10, 12 and 15 yards. I really enjoyed the pre-cocked double action trigger. It felt like a natural trigger pull that was just right for this gun. The action just snapped with each shot and reset with little travel. Many of the handguns I’ve shot in the past required a bit of a learning curve to fully understand the trigger pull however I felt like the Creed was a pistol that I’ve owned for years.

The Walther Creed pistol is a quality made handgun for an affordable price. It offers most all of the features of the other Walther pistols while still maintaining a personality of it’s own. My range session proved to me how reliable and accurate the Creed performed. A gun of this quality for this price is in my opinion, a great deal. Check out the Walther Creed and I assure that you won’t be disappointed.

Previous article: #DIGTHERIG - Jay and his Glock 19 in a Black Dog Concealment Holster Next article: Man Jumped While Pumping Gas, Grabs Robber's Gun Before Grabbing His Own