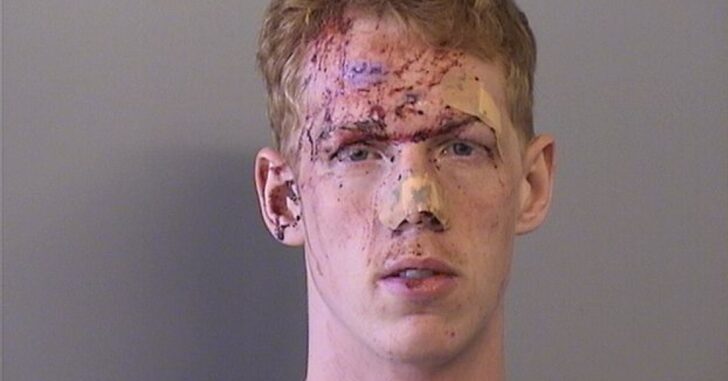 Never underestimate what any person is capable of. Know your state’s laws, your rights, and always be prepared to meet force with force when necessary and justified.

TULSA, OKLAHOMA – Police have arrested Justin Arthur-Ray Davis after he stalked a former co-worker and then shot her husband while assaulting and attempting to kidnap her from their Yacht Club apartment on South Toledo Avenue.

A statement from the Tulsa Police Department said, “Davis has been stalking the victim for over a month after he resigned at their mutual workplace. She has made reports of Davis sitting outside her apartment and leaving candy and food on her doorstep.” They also say that the woman had filed for, and was in the process of getting, a protective order against him.

The dramatic incident occurred on Friday, April 2, as she was preparing to leave for work, and was being escorted to her vehicle by her husband. They saw Davis sitting in his truck, and as he exited the truck armed with a shotgun, they ran back into their apartment with him in pursuit.

“Davis shot through the door hitting the husband in the hand. Davis [then] went into the apartment and grabbed the victim dragging her down the stairs, assaulting her along the way. The husband then came back downstairs to save her and Davis [pointed] the shotgun at him saying he will kill him if she doesn’t get in the truck. The suspect then reportedly fired two shots from the shotgun into the air.”

Neighbors were awaked by the commotion and called 911 after witnessing Davis “choke and punch the victim.” As TPD officers were arriving on the scene, Davis released the woman and fled in his truck.

Police gave chase on Interstate 44, and Davis lost control and crashed his truck into a utility pole while attempting to navigate an exit ramp.  Davis surrendered without incident and was transported to a local area hospital for treatment of a laceration to his head, after which he was booked into the Tulsa County Jail. The shotgun and ammunition were recovered from the truck by police at the crash scene. Authorities have not yet said exactly what charges will be lodged against Davis for his actions.

So, what can be learned from this incident and others like it?

A restraining order is a piece of paper, and unfortunately paper does not stop an assailant, nor does it serve as a shield or defense against any weapons that they may have.  Whether the order was or was not in effect at the time may make a difference in the charges against the assailant, but it makes no difference when someone is punching, kicking, choking, dragging, or shooting the victim or anyone else who acts to protect the victim from the assault.

Oklahoma has also been a “Permitless carry” or “Constitutional Carry” state since November 1, 2019, for anyone over 21 years of age, or 18 and in the military. Even in states where concealed carry permits are required and processing periods are 30, 60, 90 days or more, the Sheriff has the authority to grant an “emergency permit” if someone has reason to believe that they are in imminent danger of harm and have the desire to carry a defensive handgun. While not the most desirable, another option would be open carry if it is unlawful to carry concealed or a permit cannot be readily obtained.

Of course, the best course of action is to obtain a defensive firearm, quality holster, adequate training, and any required licenses or permits well before you become threatened or a victim. While stun guns and pepper spray have their place, taking on someone armed with a firearm is not the time or place for less than lethal options. Preparation is the key to safely defending yourself and those you care about.  And remember, don’t ever underestimate anyone…even if they leave you food and candy.

Previous article: Active Shooter Taken Down At Military Base In Maryland, 2 People Shot Next article: Trespasser Makes Fatal Mistake Of Bringing A Power Tool To A Gunfight