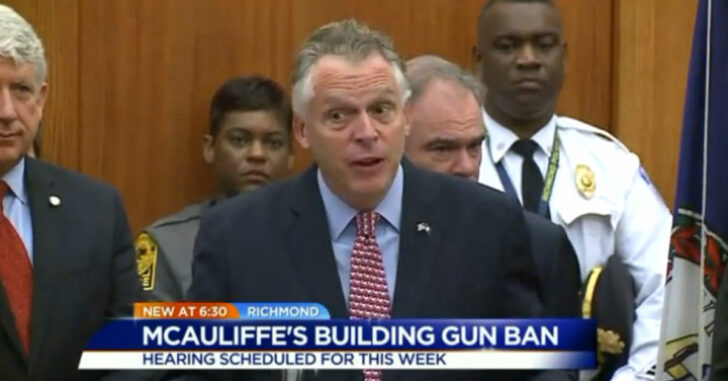 RICHMOND, VIRGINIA — Gun owners and advocates will have their moment in an upcoming town hall meeting discussing the potential ramifications of Governor Terry McAuliffe’s proposed ban on all guns in state buildings. The ban previously applied to just open carry but will be extended to concealed carry unless significant dissent is voiced at this meeting.

McAuliffe’s executive order decision to ban guns in public buildings came last year but requires this meeting in order to be put into effect permanently.

For those unfamiliar, Gov. McAuliffe has lead a tumultuous reign as the Governor of Virginia, using concealed carry reciprocity as a carrot-and-stick political measure to get his way.

Now a gun advocacy group is backing McAuliffe’s decision saying that security is good enough to justify this sort of restriction.

“They can’t guarantee us our protection. Nobody can. Only we can,” said Gary Lewis, the owner of Gary’s Guns and Transfers in Richmond.

That’s the honest truth. No amount of armed security or surveillance is a guarantee of safety. For those living under the delusion that disarming law-abiding citizens is a proactive measure to curbing gun violence, they may be exposing themselves to even more risk by restricting the movement of concealed carriers.

“To announce to the world — good guys and bad guys — that none of the good guys are armed, it makes it clear that they have no resistance when they want to do some harm,” said Ben Goldberg, the owner of LMG Guns.

Last year proved to be a great year for expanding gun rights for law abiding citizens but it’s currently packing a backlash in 2016. Public university professors, private anti-gun lobby groups, and anyone with a stake in disarming the public is weighing in heavily. McAuliffe is seeking to permanently alter the landscape of legal concealed carry in the State of Virginia and it’s not for the better.

The meeting is set to take place 10 a.m. until noon on August 31, 2016. By the time this article is published, we’ll know more about the fall out from this landmark push for the restriction of concealed carry rights.