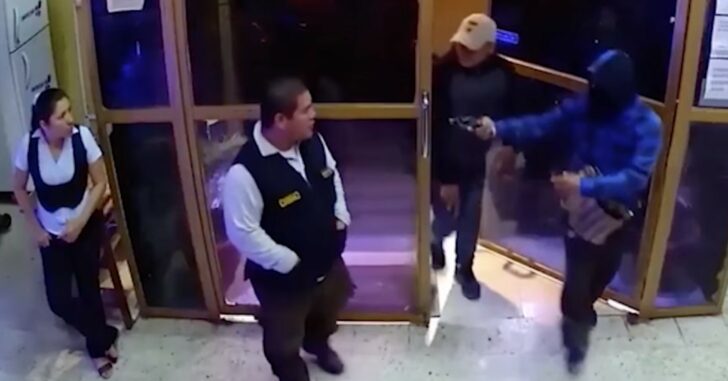 A security guard at a casino in Peru decided to fight back against 2 armed robbers, but unfortunately lost that fight after being shot in the back as the last suspect fled the scene.

It would seem that the guard was unarmed, but that’s speculation based on the video.

A translated snippet from local media describes what happened that day:

A gang of dangerous thugs took advantage of the early morning and robbed a casino in the heart of the city of Jaén . According to witnesses, it was two hooded and armed criminals who entered the games room to steal the money collected during the day. All the actions of the criminals were registered in the local security cameras. But these assailants did not imagine that the vigilante would come forward exposing his life and then die on the spot.

At first, Marco Antonio Huamán Díaz, who was working as a security agent, intercepted one of the robbers and struggled with him to try to take his weapon from him. The fight reached the corridors of the premises where customers, observing what was happening, ran away.

As an armed citizen, would you have tried to engage either suspect? Watching the video, they seemed to have a pretty good hold on the situation, and involving yourself may have ended poorly. It most cases, the best move is to get yourself to a safe location and get police on the way, but of course that’s not for every single case.

I’ve never been in that situation, but I’m sure none of those choices are easy.

Learn more about self-defense and actions to take –and not to take– in the video below.