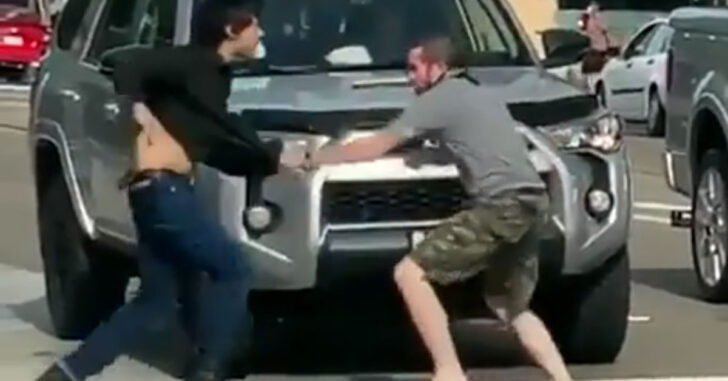 The decisions that we make when faced with an aggressor can take some time, or they can be split-second. Ultimately, the first goal is to avoid avoid avoid. Getting your body away from the aggressor is the best approach, but it’s not always possible.

The video below shows just that between two men on a city street. The man in the black shirt wants nothing to do with the man in the grey shirt, and backs up for what seems like an eternity. But then, he has no where else to go after backing up right into a car on the street.

The fight is now on, with his back literally against a ‘wall’.

It doesn’t take long for the good guy to prevail, luckily, and he lands a few punches that send the aggressor to the ground and out of the fight. Being the good guy that he is, he then attempts to get the man out of the street so that he’s not run over by a car.

Guy was given several opportunities to back out but didn't take them.

Luckily, the guy in black could fight. If he couldn’t, I doubt the aggressor would show him the same respect that the man in black did to him after knocking him out.

Another option would be to run, but only if you’re fast. It’s not always an option for many reasons, but it’s still something to consider.

If the man in black had been carrying a firearm, that’s where it gets tricky. A fist fight isn’t usually grounds for the use of lethal force, but you could find yourself in another situation: If you get knocked out or incapacitated in any other way, the aggressor could gain access to your firearm.

That’s why avoidance is key, and trying everything you can to get out of that danger zone should be at the forefront of your mind.

Previous article: New Photo From Deadly Denver Shooting Sheds A Little Light On What Happened In Moments Leading Up To Encounter Next article: [VIDEO] Man Stalked By Cougar In Utah, Manages To Survive Encounter