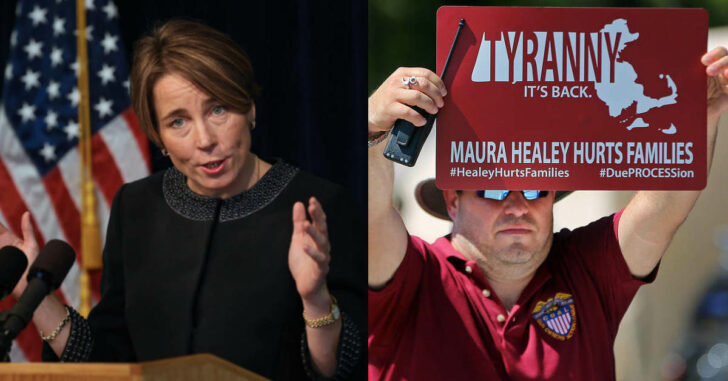 BOSTON, MASSACHUSETTS — Attorney General Maura Healy must not be a student of history or surely she would have stopped to think of the ramifications for instituting an unprecedented gun ban for so-called “copy-cat” assault weapons. Yet, here we are. And politicians are scrambling to virtue signal that they don’t agree with it — but they’re going to go through with it anyways.

via the Boston Herald

“There are a lot of Democrats who aren’t happy with her decision, but they don’t want to come out against one of the party leaders,” said state Rep. Colleen Garry (D-Dracut), one of 58 lawmakers who signed onto a letter opposing Healey’s ban.

The gun ban went into effect in July and it affects so called “copy-cat” rifles which are compliant with Massachusetts gun law but still appear similar to AR-15s and AK-47s. Compliance includes not having any of the following:

According to the Attorney General for the Commonwealth of Massachusetts’ press release, despite a ban on “assault weapons”, nearly 10,000 “copycat assault weapons” were sold in the state alone last year.

As Chief William G. Brooks III, President of the Massachusetts Chiefs of Police Association pointed out, this isn’t a new set of laws, merely a refinement of existing ones.

“It is important to understand that today’s enforcement notice from Attorney General Healey is not new law, nor a new set of regulations,” Brooks wrote in a statement supporting Healey. “The Commonwealth’s assault weapon statute has been in place for many years. To her credit, she has chosen to remind gun shops of the law’s provisions prior to conducting inspections.”

This is the problem with blind party rule. Someone says something ridiculous and then everyone just repeats, corroborates, and reinforces it.

Massachusetts gun laws are a farce. An AR-15 is no more deadly than any other firearm on the market. Every firearm has the capacity to hurt or injure people when placed into the wrong hands. A collapsible stock or a magazine that contains more than 10 rounds do not, in of themselves, constitute a single thing — especially when it comes to criminals who could give a fig less about what state laws they’re violating.

via the Boston Herald

“There is no leadership from our state party. That’s just the truth,” said Duff about the Democrats. “We need to change, we need leadership, we need courage and we need energy. We cannot take for granted that this is a blue state because it’s not.”

This has nothing to do with party lines. This has everything to do with continuing a failed practice of banning some semi-automatic firearms based upon frivolous and inherently false accusations on the capability of the firearms themselves.

Thankfully, the people are fighting back. In open protests staged throughout the Commonwealth, gun advocates and regular citizens are pointing out that AG Healey overstepped her bounds.

It doesn’t matter if every half-wit politicians from Cape Cod to Pittsfield signed off on the Attorney General’s gross miscarriage of law and the constitution, it still doesn’t make this continued precedent of taking more rights away from ordinary citizens right.

This is a true test of a representative republic. If elected representatives refuse or are unable to properly execute the duties of their station without overstepping the bounds of constitutional law, there is no need for them to be in office.

Here’s hoping the Bay State can take back their already limited rights to own and carry firearms.