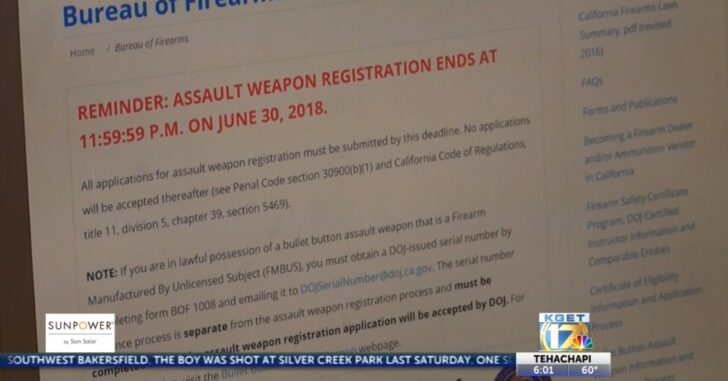 BAKERSFIELD, CA — When a prominent California farmer expended the time and effort to try to comply to California’s state-mandated gun registration laws, he likely didn’t expect to have his house raided and 12 felony charges pressed against him as a “thank you.”

But that’s exactly what happened.

According to court documents, the California Department of Justice raided Jeffrey Scott Kirschenmann’s home last month, after he tried to register an illegally modified gun online through the state’s website.

Kirschenmann is out on $150,000 bail, accused of 12 felonies for possessing assault rifles, silencers and a multi-burst trigger activator…

According to court documents, the DOJ began investigating Kirschenmann when he electronically submitted photos of an illegally modified AR-15-style firearm. Retired KCSO Commander Joe Pilkington is a court recognized firearms expert. He could not speak directly to Kirschenmann’s case but says the laws are changing so frequently, it’s often hard to keep up with the latest regulations.

“Just in the last few years, there have been lots of changes in gun laws,” he said. “Making an effort, a good faith effort to comply with these really complicated laws, should count for something.”

A new state law requires assault-style weapons be registered by the end of June.

For those like me who had to look up what the heck a “multi-burst trigger activator” is, it’s fancy terminology for a device intended to increase the rate of fire of a firearm — we’re probably talking about a bump stock, here.

When is this madness going to end?

What we have here is a vengeful, vindictive government attacking its citizens for no other reason than they want to impose their will on others.

It’s an outrage, and it’s why we have a Constitution in the first place.

What do you think? Spread this on Facebook and Twitter and let Kirschenmann know we support him!