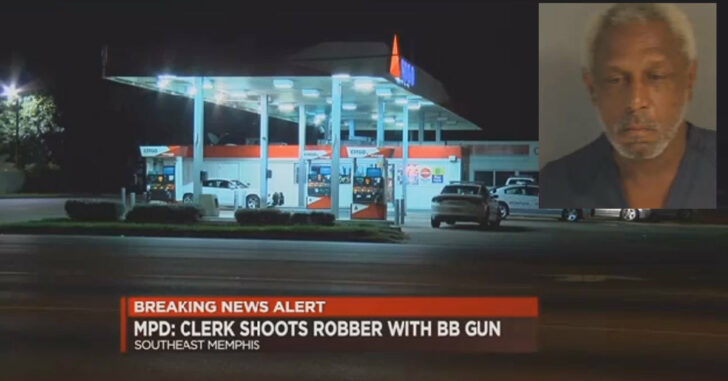 MEMPHIS, TENNESSEE — A man armed with a knife attempted to rob a convenience store at 3 a.m. only to discover that the clerk wasn’t going to be an idle victim. According to Memphis police, the clerk managed to escape into his office and retrieve a BB gun which he then used to shoot the suspect in the leg.

This was enough to force the suspect to flee the scene where… And get this… He called police to inform them he had been shot by the clerk.

Memphis police arrived on the scene and according to WBRC FOX 6 News, they quickly determined from the clerk’s testimony that it had been an armed attempted robbery.

What an embarrassment! An armed thief hoping to take home some cash and probably a few beers ended up getting charged with aggravated assault. It’s pretty clear the man may have been under the influence at the time of the attempted armed robbery and must not have thought too clearly about his actions.

Needless to say, a BB gun pellet was enough to scare him off. It’s not something any of us concealed carriers would bet our lives on but, heck, if a BB gun is all that’s required for this situation — we’re going to give the clerk the benefit of the doubt and say he neutralized his target.

We’ve reported on a rash of attempted robberies occurring in convenience stores. The basic trend we’re seeing is that more clerks are arming up and preparing themselves to fight back. Now, it may be a baseball bat or a BB gun or an actual firearm, but the message is clear: we’re not going quietly.

Convenience stores aren’t exactly Fort Knox. There’s no grand pay-out for either party. Clerks don’t deserve to be held under duress with a deadly firearm for $50 and a pack of cigarettes. Armed robbers should have a little more common sense.

If they don’t, perhaps it’s time for a bit of education by preparing one’s self to carry a concealed handgun every single day behind the counter.

Because we can’t guess when idiots attack, we can at least be certain that when they do, they’ll be met with equal or greater force in return.

Stay safe out there and leave that hot dog that’s been in the warming tray for 8 hours alone. You’ll thank me later.

Previous article: Before The Feds Crack Down On Guns, It'd Be Nice If They Could Account For Their Own Next article: CA Sheriffs Explain Their Take On Guns... We Listen