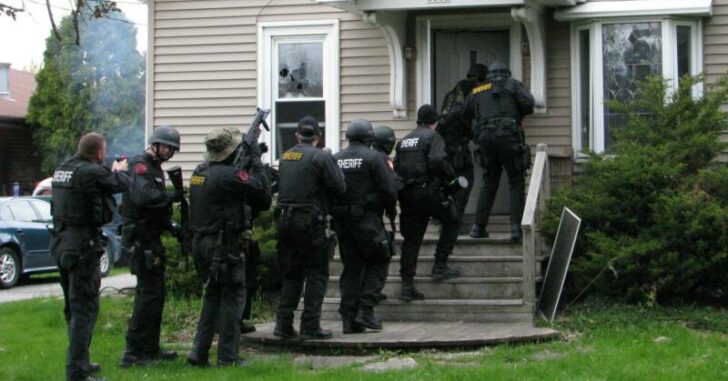 “SWATting” is a relatively new and nefarious phenomena where anonymous internet trolls gain access to sensitive records of “prey” and then forge up an excuse for a SWAT team to raid that person’s home.  When SWAT arrives, they absolutely believe whatever they’ve been told prior to arriving on your doorstep or place of work.  They have to because their lives are on the line.  Unfortunately for the home owner and especially a concealed carrier — there’s no good way to stop that SWAT train once it’s arrived into station.

The situation gets even worse if the homeowner is a legally armed citizen.  When SWAT enters, they do their very best to respond to the situation they’ve been called to.  As a concealed carrier at home or out in town, your first instinct is to defend and protect.

This is where situational awareness could never be more important.

You have milliseconds to identify yourself and your status in the most non-threatening way possible.  This should include extremely slow movements.

A similar situation happened in September where a Wisconsin dad was “SWATted”.

According to CBS, this is the exact message traffic police were receiving when they were sent in to an unsuspecting person’s home.

Dispatchers over the radio said:

“Male shot a female in the face with a shotgun, don’t know her status, and this is a highly unsafe situation right now.”

“He’s still at the residence. He’s saying if you come near him, he’s going to start shooting and has the door booby-trapped with C4.”

The homeowner did not shoot anyone and did not have explosives.  Someone was delivering bad message traffic to the cops — forcing them to take the precise measures they would intend to take if that situation actually existed.

Thankfully, the cops called the real person and were able to confirm the real situation.  It still entailed streets being closed, multiple agencies being called in to assist, and a very real-time chaotic situation unfolding.

And, unfortunately, it’s no where near as rare as we’d hope.

The New York Times recently published a lengthy article going over the ordeals of a woman being stalked by one such anonymous piece of trash.

She was awoken at her parent’s home in Toronto to the sight of police scattered all throughout her home.  Coming downstairs to meet firearms trained on you is something no innocent person should have to endure.

‘‘I was scared to move,’’ [one victim] said. ‘‘I wanted to go downstairs with my hands up. I was afraid they would shoot me. I was so scared. I feel like they just didn’t really let their guard down until I told them what happened.’’

As concealed carriers, this threat is all too real.  Personal, identifying information is relatively easy to obtain online with very little skill.  Even “secure” databases such as the ones where people submit their background investigation information for government-issued security clearances have been breached and information stolen.

I know.  My information was in that breach.

No piece of data is truly safe.

So, as concealed carriers, we’re left in the unfortunate predicament of not only needing to identify ourselves but identifying we’re armed in a hostile situation.  That requires real nerves of steel.

Much past that will be left in the hands of the law enforcement officers who are on the doorstep.  Welcome to this brave new world!