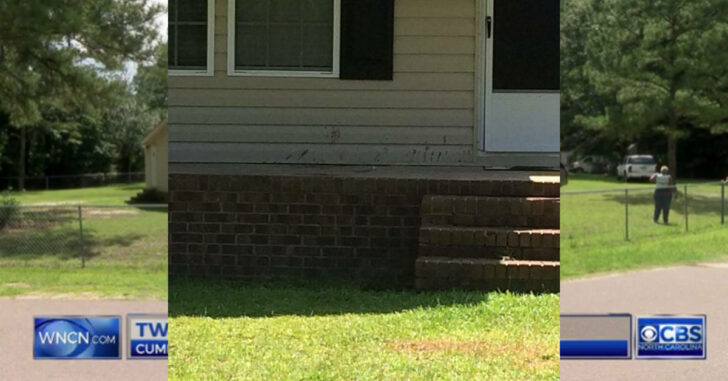 CUMBERLAND COUNTY, NORTH CAROLINA — As a couple returned home, they were surprised at the door when a man emerged from the shadows and allegedly said, ‘you know what this is.’ That robber, who was armed with a handgun, probably thought that implied the homeowner knew he was going to get robbed. What happened, however, was a gunfight.

‘You know what this is,” became some dumb robber’s famous last words. That phrase should be plastered on his tombstone. The homeowner drew his handgun and opened fire on the robber. According to CBS North Carolina WNCN News, the robber didn’t immediately fall to the ground and die. He shot the homeowner’s girlfriend.

By the time police arrived, both the robber and the girlfriend were so critically injured that they died out on the ride to the hospital.

A very tragic end to this situation.

This is a reality in self defense gun use. The good guy doesn’t always live. And, in some cases, neither do those around the good guy. The homeowner, in this case, was uninjured but the loss of someone very dear to him is a painful accent to this horrible situation.

To be perfectly honest, in instances where the bad guy already has his gun drawn and ready to go — we’re surprised more people defending their lives don’t suffer a higher rate of injury in these scenarios. Think about it. A man already has a gun on his victim. The victim refuses to be a victim and pulls his gun to respond. No matter how fast a person draws his gun, there’s almost no way it will be out and on target before the bad guy can fire.

We honestly don’t know. In a surprising number of instances where a gun owner or concealed carrier pulls his gun while in a point blank situation, he or she doesn’t generally suffer gunshot wounds in the exchange. That’s pretty weird. Very good but very weird.

It’s not something we should come to expect in these types of situations.

When a bad guy has a gun already trained on his victim and that victim decides to fight back, we have to expect that it’s not going to be an easy fight. There’s almost no way to effectively guarantee a training environment that properly hones that skill set. Fighting your way through a gunshot wound to still put rounds on target is not a course criteria for anyone.

In this type of gun use scenario, the loss of life is virtually guaranteed on both sides. Our condolences go out to the homeowner on the loss of his girlfriend.

Previous article: #DIGTHERIG - Todd and his S&W M&P Shield 9mm in an Alien Gear Holster Next article: Bad Guy With Machete Vs. Armed Citizen: Who Wins? Everyone.