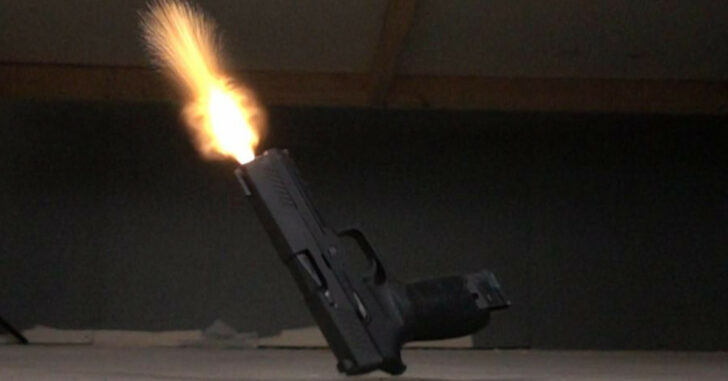 August, 2017. First online reports surface on social media that a commercial Sig Sauer P320 was able to fire on its own when dropped at a specific angle onto the ground. Initial reports suggested that a Dallas police department had officially told its officers that they were not authorized to carry the P320 due to safety concerns.

This concern quickly spread out across the internet. Before long — and before any fact checking could occur — the P320 went from a great striker fire pistol to public enemy #1.

At the time, it was estimated nearly half a million commercial P320s were on the market.

With the onus of burden nearly always on the gun owner if a pistol discharges accidentally, P320 pistol owners were now voicing their concern that this pistol was unsafe.

As Sig Sauer demonstrated in the following days with their ‘Voluntary Upgrade Program’ FAQ, the commercial P320 was tested rigorously to multiple drop safe standards.

Yet, video after video kept surfacing of gun owners drop testing their P320s with live ammunition.

It was a marketing nightmare for Sig Sauer and a completely unsafe practice for consumers. Despite Sig Sauer’s own problems, there were plenty of gun owners that were testing the P320 with dummy round with primed casing and were still getting the same issue.

The ultimate break-down to the issue was this: the trigger and the disconnector needed to be modified in the P320 in order for it to be deemed ‘even safer’ for drop test conditions.

However, it completely overshot the biggest point: a gun owner should never drop test his firearm with live ammunition.

It’s a point that kept being missed as P320 owners kept dropping their guns to see if they could replicate the problem. Miraculously, no one was hurt… Well, disputably this guy was but there’s still some ongoing murky legal stuff going on regarding that case.

Drop testing guns, as a consumer, is not a smart move.

First off, there’s arguably no real safe way to do it with live ammunition.

Second, there are multiple agencies — from SAAMI to NATO — that conduct their own specialized tests that manufacturers have to pass before releasing their pistols for purchase by certain law enforcement and military organizations.

Third, you are massively degrading your pistol by dropping it in the first place. Even though just about any pistol should be able to sustain a number of drops from roughly 1.5 meters, it will almost always deform or degrade the polymer and exposed steel surfaces of the gun. This is especially true if you decide to go “hardcore mode” and start gorilla bashing your pistol on the hard concrete.

Unless you just like destroying your own property, drop testing is not a good way to go.

If you are just utterly unconvinced that your pistol can sustain basic falls without discharging itself, get another pistol.

No pistol is guaranteed safe to drop while loaded with live ammunition. Any manufacturer espousing complete and total safety of its pistols is setting itself up for a legal nightmare that it completely and utterly deserves.

No loaded pistol is 100% drop safe. There is always some chance that it will go off. That chance is relatively small in most cases.

That said, don’t drop it. And if you have an aforementioned P320, definitely consider the Voluntary Upgrade Program.