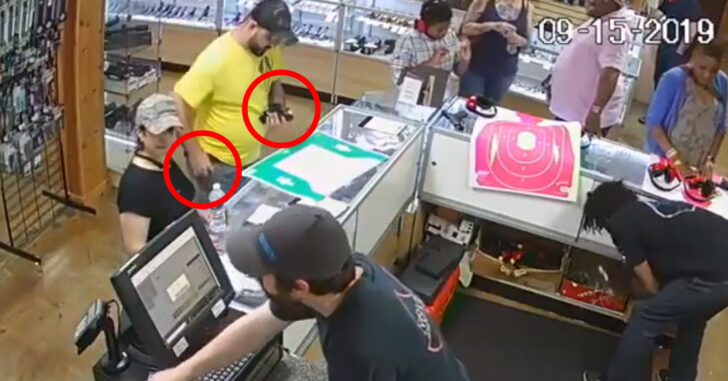 As detrimental as incidents like this can be to gun owners across the Country, it’s important to recognize that not everyone is as responsible as we are.

And when it happens, we tend to put them on blast.

The guy in the yellow shirt in the surveillance video below is at the gun shop and range with his girlfriend. They’re about to go shoot and are getting targets at the counter.

He’s got a Glock in his hand with the slide back and no magazine. At some point, he reaches into his pocket to produce a loaded magazine and goes to put it in the gun, but the shop employee tells him not to do that.

He puts the magazine back in his pocket, only to take it out again a few seconds later and put it in the gun.

He walks around the corner of the counter, among many other customers, and releases the slide. At the same time, dum dum’s finger was on the trigger.

Luckily, no one was injured by the shot. The man was immediately told to leave and received a lifetime ban from the shop and their range.

A good question to ask: When you’re at a gun shop, are you paying attention to what others are doing around you? If you were there and saw this guy loading his firearm inside the shop, would you have said something? Chime in below.

Previous article: NY Politician Wants You To Microstamp Your Ammo And Get Rid Of Old Ammo By 2022 Next article: Two Juveniles Return To House Where They Committed Assault Days Earlier, This Time The Residents Fought Back