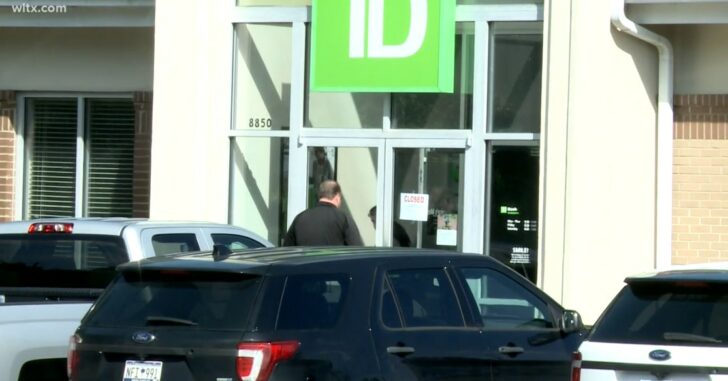 COLUMBIA, SOUTH CAROLINA — A teller at a TD Bank fired shots at a man who police say just robbed the bank, and there’s a very real chance that he could lose his job as a result.

It’s no secret that banks don’t want their employees to be carrying firearms at work. After all, they’re insured, and want the bad guys to be done and out as quickly as possible.

Here’s what happened in this incident;

Deputies say the man entered the TD Bank on the 8800 block of Farrow Road around 3:40 p.m. and handed a note to a bank teller, requesting money.

When the suspect tried to flee, the teller reportedly went to his car, retrieved a personal gun and shot at the suspect. The suspect didn’t present a gun or say he had one during the robbery, according to a report.

Police aren’t sure if the suspect was shot by the armed teller, but noted that the suspect did not display a firearm or mention that he had one.

Like it matters. He’s still robbing a bank, so it’s fair game for the armed citizen.

It would appear that the teller was prohibited from carrying inside the bank. In this case, if my firearm were in my vehicle, I can’t see myself going outside to get it in order to shoot a fleeing suspect.

Let them flee, and get a good description.

Not to mention, in many places, you’re breaking the law if you fire at a fleeing suspect who is no longer a threat.

Here is the suspect that police are still searching for:

Even if you have eyes on the suspect, what’s to say he doesn’t have an accomplice waiting somewhere for him? The better solution; be armed on the job.

It’s not necessarily to stop the bad guy from getting away and more about saving your life. Some robberies result in the bad guys shooting innocent people, even when they do comply. It’s up to you as to whether or not you want to play the odds.

I worked in the banking industry for almost 8 years. It was before my time of carrying a firearm, but I always wondered what I’d do in the event of a robbery. The banks always tell you to comply. Always.

This article is a H/T to The Truth About Guns, and Dan shared the following video along with his article. He notes, “Make sure you catch the last lines at the end of the video.”