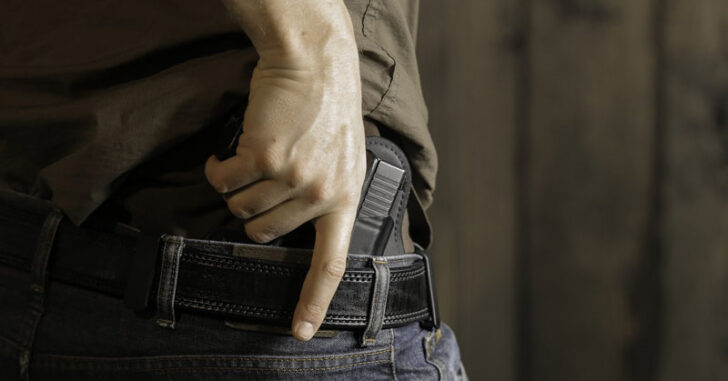 As a dedicated shooter that also trains others to use a handgun in a defensive capacity I am delighted by the proliferation of training available today. Sadly, out of the many millions of people who keep and even carry defensive firearms, only a small fraction take any kind of serious training. Nevertheless, the training is out there for those who pro-actively seek it. One issue that I see in the field of training, however, is a lack of emphasis by many instructors on realistic training consistency as it pertains to concealed carriers. Most of the well-known firearms courses being taught by respected trainers out there have participants work almost entirely, if not exclusively, from open belt-worn holsters rather than from concealment. If a course is geared primarily for law enforcement or military personnel this may be appropriate, but if the target audience is concealed carriers, how is this training in any sense realistic? The tactics and other elements taught in the course may be great, but if you have students doing many draw repetitions from a carry mode that they never actually use in the real world then this absolute most critical skill is being compromised and this is a training inconsistency.

The reason most instructors have their students work from an open holster is quite simple: liability. The reality is that drawing and re-holstering a gun from concealment makes the task a bit more hazardous and instructors want to be able to minimize risks. It is also true that many students in any given firearms training, even higher level classes, are rather inexperienced gun handlers. Therefore, open holsters equal a safer environment for all. This is understandable, but it limits the relevance of the training for most participants. There is also the issue of fatigue, as working with a handgun from concealment is more physically, and certainly mentally, fatiguing than doing so from an open holster. Again, this is understandable, but working from open holsters limits the relevance of the training for concealed carriers.

I believe that once a concealed carrier becomes safe in the handling of their handgun any draw and presentation done with the gun that is not from concealment is counterintuitive. A fast and consistent draw is, bar none, the single most important skill for a defensive handgunner to obtain, and the majority of training out there simply ignores this skill because it is not convenient to deal with. Most concealed carriers never reach any semblance of proficiency at drawing their gun from concealment, which is disturbing. The average armed citizen with a carry permit gives this skill little consideration and this top training priority is ignored.

I am primarily a defensive oriented handgunner, but I do competition as well which I really enjoy and I highly recommend that all who carry participate in competition to reap the benefits offered. Despite the fact that the vast majority of good competitive shooters use open holsters, or open holsters with token “concealment” vests like in IDPA, I compete from real concealment, using my real carry gun. Why? Because I want to build absolute consistency. There is only one way I draw my handgun, from under an untucked shirt or closed front jacket, the draw is exactly the same, and when I compete in IDPA I do it exactly the same way. Does this hinder my score compared to the guys using open waistband holsters from under a glorified fishing vest as is the norm in IDPA? Perhaps. But I train to draw my gun only from the way in which I carry it, which is the only draw stroke that counts.

Therefore, when training on the square range you will never see me with the gun in an open holster. Why? Because I carry my handgun concealed, not open, and doing a draw from an open holster has zero applicability to my real life. Each repetition drawing an openly carried gun is, for me, a repetition in doing it wrong. This is the reality for most concealed carriers. If you are an open carrier, then should you train from an open holster? You bet. Now you are training in an applicable manner. Similarly, if you are a police officer you should be drawing your gun from an open retention holster. However, most people who carry a defensive handgun do so concealed, yet rarely are these people training with the gun from concealment.

Now, there are shooters who will inevitably train for different draw strokes due to their need. If you are a serious USPSA shooter and a concealed carrier, you are most likely going to train for both. Fine, but be sure to train extensively from concealment as to not ignore this arguably much more important skill. However, for most that carry concealed and are concerned primarily with self-defense rather than shooting sports, I think that if you are training with the gun from anything aside from the concealment mode that you actually use, then you are doing wasteful and counter-intuitive repetitions. Unfortunately, most people that I see training at a range do not even train from a holster, and the few that do usually do so from an open holster. I realize that many public ranges do not allow training from a holster. The range that I go to does allow this, yet even there the percentage of people who train from the holster is dreadfully low. If you only have routine access to a range that prohibits drawing your gun from a holster, be sure to do extensive dry-fire to hone this skill.

Another element of consistency that should be taken seriously is the location of the gun when you carry it. You should strive to minimize how many different carry locations you need to employ. Inevitably you may need at least two carry modes. For example, I usually carry a full-size service pistol on my hip. However, when dress or occasion does not permit for this, I will carry a small revolver in a pocket, or even on the ankle, if need be. I would rather carry a gun in a secondary location than have no gun. However, I strive to always carry my gun in the same primary location. You will automatically and sub-consciously reach for your gun where you have trained for it to be. If you don’t believe that and you have to consciously think about where your gun is each time, you have not trained enough.

In closing I will emphasize this: consistency in your training is the only way to build true proficiency in any given skill and the single most imperative skill for a defensive handgunner is a fast and predictable draw. Your abilities with the gun do you no good if you cannot deploy the gun quickly, and this simple fact eludes many. Doing draw strokes from a carry mode that you do not actually use in real life is counter-productive even if it is more convenient. Build consistency into your training and dedicate this essential skill to reflex and you will be far more capable of deploying the handgun should you need to.