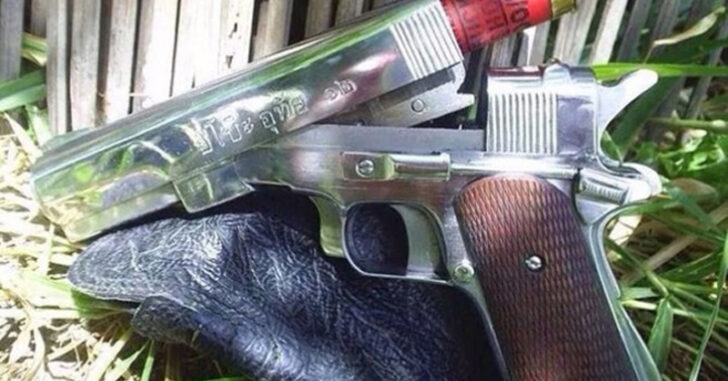 This image of a “custom 1911 shotgun pistol” has gone viral in the last week across gun forums everywhere. We have no idea where this came from other than “somewhere” in Thailand as evident by the Thai characters along the “slide”. If the time stamp on the bottom of the photo is to be believed, it’s been around for nearly 8 years, but we’ve never heard of it. If you do an image search on google you’ll come up with next to diddly squat. Many people believe it is a plastic toy with chrome paint and a shotgun shell shoved in the breech, while others argue it’s an authentic “Pradit” gun. Pradit guns are illegal homemade 12 bore shotguns built from existing gun frames including BB guns. They’ve become increasingly common among poor gang members throughout Thailand. Is this real or fake? We don’t know at this time. All we can say is that firing it cannot possibly feel good.

These images appeared out of nowhere in a Thai Forum. We ran the text above the images through a translator and came back with this gibberish:

Is that last sentence supposed to be a question? Sure we’re interested, and it looks custom made alright, but what does assisting your uncle with basic hygiene have to do with it? Must be some sort of culture shock on our part.

Compare these images with an actual Pradit gun confiscated by a Thai police officer below. If some brave soul has filmed the real deal, we’d love to see the video! Thai officer holding an authentic Pradit gun and shells that were confiscated in a 2013 traffic stop.